Two DC Horoscopes are shown here: May 1, 2019 10:00 am edt (inner) and May 2, 2019 10:00 am edt (outer). Today AG Bill Barr is to testify under questioning chaired by Republicans, tomorrow (possibly at 9:00 am edt) AG Barr may testify under questioning by Democrats on the House Judiciary Committee if arrangements are agreed upon. Note that on both days the Sun 10-12 Taurus shines upon asteroid Astraea, goddess of Justice. Notes on Saturn conjunct South Node of the Moon are penned on the chart (upper right) while the Moon (We the People; the public mood) is in Mars-ruled Aries which should assure the hearings much public attention and denotes anger or at least active participation in social and other media on this topic. 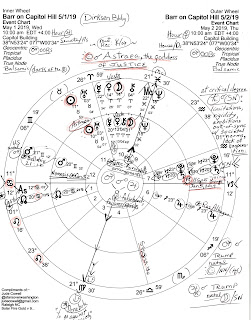 Rising is America's natal Sun in Cancer (13Can19) denoting the Office of the Presidency which makes the Moon in Aries ruler of the chart so apparently the American public's demand for these hearings are rising or are the reason hearings are being held. Are we feeling wounded? I would say, yes, we know we are and the only aspect by the Moon in the May 1st chart is her conjunction to Chiron (2A14). But on May 2nd, Luna meets with Venus (0A18 at 10:00 am) which sounds lovely yet can also denote moodiness and assessments of weakness and of being easily led (Democrats beware!). Feminine influence (Amy Klobuchar? Kamala Harris?) is indicated as well yet the Moon-Venus conjunction occurs opposite US natal Saturn (14Lib48), a significator of accountability, our legal system and lawmakers (including those grandstanding for the cameras during these hearings). This trio also hints that some form of renunciation may occur and certainly rigid feelings will be shown; lady lawyers playing their parts are also indicated by Moon-Venus-Saturn.

Falsehood and failures are seen via the continuing Mars-Jupiter Rx opposition which has been squaring veiling Neptune now waning but Neptune is strong in its sign of shady Pisces. However, the Mars-Jupiter midpoint sits upon MC (The Goal Point) showing that favorable arrangements have been made and some measure of success will follow. As you see, the opposition links directly to Donald Trump via his natal Sun-NN (Uranus)/Moon-SN opposition (penned, lower right) with unpredictable, chaotic Uranus acting as always as Trump's 'guiding' planet in his 10th house of Career and Public Status. Mars-to-Sun: he's feeling energetic and angry, Jupiter-to-Moon: he's feeling 'happy' yet Jupiter is weakened (Rx) while leading a BOWL shape of planets. Trump's happiness is based on fluctuating foundations. Still, this is an opposition between testy Mars and expansive Jupiter so overestimation of one's strength and capabilities is evident and can lead to dangerous consequences.

The hearings are occurring during a Balsamic phase of the Moon, the darkened phase when 'things go bump in the night' and someone could be replaced. The upcoming New Moon @14Taurus on May 4th falls upon America's Inauguration Ascendant (the Presidential Oath of Office) but since powerful forces continue supporting Trump in the Oval Office (for now), will calls for AG Barr's resignation become louder? We'll know more of such topics by the light of the Full Moon @27Scorpio on May 18th which falls within the natal 4th house of Donald Trump.

Now in both hearing charts, above, prominent is Neptune in Pisces, a signature of the Republican Party (1854), at Midheaven which is the 'hiding in plain sight' significator so it's doubtful that ongoing lies, illusions, and obfuscations will be fully revealed today or tomorrow if they turn up at all during these hearings but will be on display for all to see (MC) along with official scandals of large proportions -- plus, there is fixed star Denebola at IC (The Foundation Point of the Matter) with its 'to go against society' theme suggesting that many if not all of these political actors are doing little more than performing a mystery play for public consumption -- for there also at IC sits US natal Neptune which, like the typical astrological Neptune, so often puts on a good if illusory show.

No Bill Barr shows up May 2, 2019 to House Judiciary Committee to be re-grilled. Must be licking his wounds from yesterday's questions by Senate Democrats esp Kamala Harris, Maize Horono (sp?), and Dianne Feinstein. Bill Barr and Donald Trump scared as little gurrls!

Balsamical Retreat for Rod Rosenstein right on cue, may the Volcanic holiday on the may 18 full moon bump the bull off this unjust stage, or at least sting the beasts into opening some "sealed" inictments.