In case John Dean of WaterGate fame accepts Jerrold Nadler's invitation to speak on June 10th to the House Judiciary Committee on Capitol Hill, below is Mr. Dean's natal horoscope with June 10th transits set for 9:00 am edt snugged around it--not because the hearing will open at that hour (probably closer to 9:30 or 10:00 am) but because 9:00 am happens to be the time that Dean's natal Pluto @1Leo26 rises over the Capitol Building.

In other words, I'm using the June 10th horoscope as a symbolic chart of the power (Pluto) Mr. Dean may wield through providing information which could very well have a (plutonian) transformative effect on current rather stalled conditions. 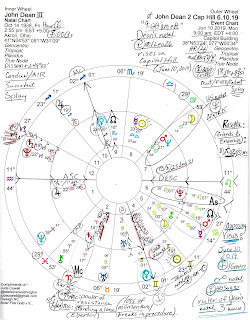 Now with the event's occurrence and timing being iffy as such Washington events tend to be I won't spend much time typing about it here, plus, quite a few basic chart notes are penned messily on the bi-wheel charts if you care to look. However, note that Dean's Venus @00Sag32 conjoins his natal Midheaven (The Goal) and rules his 3rd house of Communications via Taurus--and June 10th Venus @1Gem47 opposes his natal Venus (see lower right, highlighted in blue) which triggers opposing views and conflicts within relationships. Dean's natal Saturn, planet of authority, accountability, responsibility, law, and government conjuncts the 9:00 am Midheaven as he dutifully shares his opinions with the world (MC). This could be refreshing, who knows? For one thing, Dean will be highly motivated (transit Pluto trine natal Mars) as he expresses his diplomatic views blended with self-interest (transit Venus conjunct natal IC, the Foundation of the Matter). However, with the Moon in critical Virgo reflecting Dean's natal Mars-Neptune conjunction (8th house), images of crooks, treachery, and/or scandal may turn up in the news (Moon = the public; publicity) concerning this hearing or possible accusations of such may be hurled at Dean himself.

Now by transit on June 10th, most of us are dealing on some level with the Sun-Jupiter opposition squaring deceptive Neptune in Pisces (in John Dean's 1st house of Self) which suggests general potentials for loss, sensitivity, and the crooks we hear and read about each day (one ex: Nixon).

Plus, transit Mars conjunct North Node is lining up to oppose the difficult Saturn-Pluto conjunction (exact @22Cap46 on January 12, 2020--conjunct Trump's natal Vertex of fated encounters) which hints at the harshness, ruthlessness, and brutality now prevalent in society--and that someone is fighting for his very existence. I leave it to you, dear reader, to decide who that could possibly be as DC Democrats continue their careful attempts, slow as they seem, to hold a not-above-the-law president accountable for his actions.