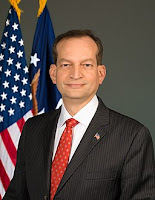 Donald Trump's embroiled Secretary of Labor Alex Acosta was born on January 16, 1969 in Miami, Florida and has served as US Labor Secretary since April 28, 2017. Here you see his official Labor Department portrait. Also see CNN's segment Breaking down Epstein's sweetheart deal now spotlightig Acosta's involvement in the Jeffrey Epstein case. Of course, "sweetheart deals" for the wealthy class are not uncommon in America's two-tiered 'justice' system, are they? Yet pedophiles are the lowest of the low, even in prison and apparently Epstein maintained a vast network of depravity that may eventually ensnare other perverted fish in its net of publicity if not captivity.

So is there anything outstanding about the natal planets of Harvard-pedigreed attorney Alex Acosta or perhaps a significant transit that applies to current events? Let's peek at the placements of January 16, 1969 using 'noon' since we have no birth time for him. Right away, we know he's a Sun Capricorn, sign of government, law, and business, ruled by legal planet Saturn, of authority, judgment, responsibility, and accountability fame. Now 50 years old this year, Acosta's natal Chiron @29Pisces is emphasized for its 'wounding/healing' and 'blind spot' functions--at a critical-crisis 29th degree and conjunct his Nodal path of destiny. For personality details (conscious-unconscious energies) we can check his natal Moon sign (in Sagittarius or, if born after 3:38 am est, in Capricorn) to add to his Capricorn Sun (conscious mind; adult personality). Plus, as you know, a Moon sign reveals information about a person's 'reigning need' (Tyl) and Acosta's natal Moon was out-of-bounds ('OOBs') all that day denoting a faulty and/or estranged relationship with Mother. So is his need for Sag 'freedom' or Capricorn 'authority'? See details, below.

Then there's Acosta's Prenatal Solar Eclipse series ('PE') which adds some very useful background information and supports the Capricorn need for control and authority which further adds to what I suspect are father-mother-parenting issues in his nature. And maybe his lusty Mars in sexy Scorpio has an opinion!

First, below, is the noon natal horoscope of Alex Acosta (inner) with the transits of December 13, 2019 snugged around it. Why those transits? Because on that day, transit Saturn @19Cap19 squares Acosta's natal Saturn (19Ari19 at noon) for the third of three times in 2019 (in green). Naturally, there are other planetary transits to his chart (ex: Neptune in Pisces to natal Venus--focus on his social behavior) yet a Saturn-Saturn square is so very timely and descriptive! For this restrictive period highlights law-abiding Saturn's legal and justice functions on an inner level (square) and marks 2019 as a testing year of squares beginning on or about March 22, squaring his Saturn again on June 8, with the final square coming December 13, 2019, the resolution phase. Karmic Saturn's orb of influence would be prior to those dates, and of course, without a birth time for him the dates of exactitude could possibly be off by a bit but not by much (making this a general guide to Acosta's Saturn-SQ-Saturn period 2019, a time of fears, formalities, and demands to conform): 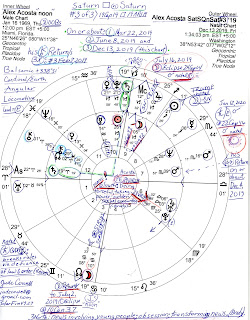 Now only a few of my notes are penned on the charts for as both readers of SO'W know, I get rather fussy trying to type much about untimed charts. However, in the center of the bi-wheel I've penned on Acosta's PE in the 6 South ('6S') Saros Series @29Vir29 and some of its themes which include: 'being forceful and taking power' and 'sudden sexual encounters' (Brady). Obviously the first supports a Capricorn personality while the second suggests possible involvement with low characters such as Epstein. (I don't know this, I'm just sayin' since Bernadette Brady mentioned it first.) Perhaps time will tell or will exonerate Alex Acosta from all but his prosecutorial ramifications. Yet I would feel remiss not to add that Acosta's natal asteroid Lilith, the seductress, conjoins his natal Mercury in Aquarius, planet of young people (puers and puellas). Note that the last 6 South eclipse occurred on October 14, 2004 @30Aries and the next will perfect on October 24, 2022 @2Scorpio. And fyi, 6 South is the PE series of the 'Nazis' Rise to Power' in 1932: 'taking power'.

Now the bright, illuminating rays of the Lunar Eclipse of July 16, 2019 @24Cap04 are set to potentially reveal something about Acosta's natal Sun--more scandal? Secrets and/or leaks? This could occur prior to July 16 of course which is only 5 days hence as I type. Plus, the heavyweight transit of major karma, the Saturn-Pluto Conjunction @22Cap46 on January 12, 2020 may be worrisome for Acosta for it perfects near his natal Sun (25Cap53--26:55)--look for its position in the chart between the Venus-Pluto conjunction, above. Reinhold Ebertin says the intense Venus-Pluto pair of energies working together relates to lasciviousness, an excessive sexual urge, and/or to fanatic love. Will Saturn-Pluto bring restriction and accountability to Alex Acosta? Or merely to the other culprits involved in this tragic drama? How interesting that hidden wealth and organized crime are also features of the Venus-Pluto combination.

Sun Cap-Moon Sag (Earth-Fire: powerful ego 'runs the show'; domineering) is self-motivated, zealous, and authoritative. This blend suggests the forceful personality of a natural politician, professor, or priest who occasionally likes to toss off the yoke of responsibility and "indulge in a crazy adventure". This is the 'old man' + 'crazy teen' combo but with a sense of 'high-mindedness' and a tendency toward pomposity. If Acosta's natal blend, he gets "fixated on narrow views that become rigidly moralistic".

Either or both of its two Images for Integration may apply: "In his spare time, a High Court judge takes up the serious hobby of gambling at horse races...A bank clerk plans a world cruise." And if this is Acosta's natal blend we should add two quotes from famous folk born under its influence:

"Great lords have their pleasures, but the people have fun." - Montesquieu; and, "All the things I like to do are either immoral, illegal, or fattening." - Alexander Woolcott. Well said, Mr. Woolcott!

The Sun Cap-Moon Cap combo (Double Earth: matter-of-fact; dependable; 'pillar of society'; fears chaos and loss of control) denotes practicality, responsibility, realism, and autocracy. Self-absorbed, serious, and ambitious, this blend tends to act professionally with a strong will power mobilized toward success. His "resourceful intellect always needs a challenge of some kind" and he is terrified of change and of things mysterious. Lust for power (Heaven Knows What, Grant Lewi), materialism, and shrewd common sense are marked features of his nature and he may wear overly tough defensive armor for he always expects the worst. Safety, security, rationality, authority and control are important to this stern combination with its double Saturnian vibes which can judge others self-righteously. Naturally, a legal career seems appropriate, or perhaps a career in politics or investment banking.

Now Sun Cap-Moon Cap has only one Image for Integration: "A hoary grandfather sits in his chair with his grandson on his knee. He gives him a gift for his seventh birthday - a first edition of Pilgrim's Progress."

Amusing that '7th birthdays' tend to mark the time frame of our very first Saturn squares!

To the extent that Saturn can inspire amusement! Well, sometimes, right? jc

July 12, 2019: Saturn had his way! Alex Acosta announced he's resigning from his cabinet post in the Trump 'administration'. So Saturn in Capricorn out-trumped and blocked (squared) his Saturn in Aries. jc