Don Jr and Jared battle to head the 2020 Campaign

Born on January 10, 1981 in Livingston, New Jersey, a previous post In the Realms of Jupiter: Jared Kushner uncovers a few things about the son-in-law of Donald Trump including Jared's prominent Jupiter-Saturn conjunction in Venus-ruled Libra.

A view of the natal horoscope of Donald Trump Jr is available with a Rodden Rating of A at astro.com (born December 31, 1977 5:20 pm est Manhattan, NY with Sun 10Cap09, Moon 21Vir22, Ascendant 19Can09; Jupiter 29Gem52 Rx sextile Saturn 00Vir09 Rx). As you see, Don Jr's Saturn conjuncts his Papa's natal Ascendant (29Leo) where royal star Regulus blinks and cautions: success if revenge is avoided; if not, all that has been gained will be taken away. So father and son Trump share, if not heed, the karmic caution of Regulus.


Now perhaps you've heard the news that Don Jr and Jared "really dislike one another" and that both want to head Donald Trump's 2020 Campaign for re-selection. Vanity Fair's PolitiZoom of July 6, 2019 characterizes their disagreements as an "escalating cold war" and opines over its effects on the 2020 Campaign. (Funny, I just noticed that "Vanity Fair" can be described by Jupiter in Venus-ruled Libra and its typical cry of, "it's not fair!" with Venus the planet of vanity. Funny because Jupiter in Libra is shared by Trump Sr and his son-in-law Jared Kushner, husband of Trump's favored child, Ivanka; and of course, Venus is a money planet, too.)

For the sake of comparison, and since I know of no accurate birth time for Jared Kushner (purposefully hidden, one imagines), below is a natal horoscope bi-wheel for Donald John Trump Jr (center, timed) and the untimed Jared Kushner: 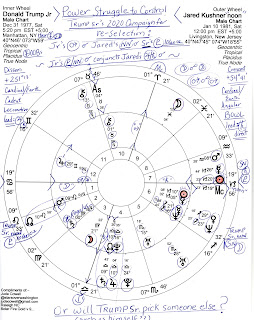 Of interest to our topic is their Mars-Mars opposition across the Leo-AQ self-will axis (diametrically opposing motivations and actions), plus, the Mars-NN-Pluto trio that forms when Trump Sr is in the mix. This forceful planetary trio of power and manipulation conjoins the 2nd cu$p of Don Jr's chart and reveals power and control issues with a karmic flavor. Apparently the two fellows were destined (NN) to disagree (Mars). The presence of Trump Sr's shady Pluto (@10Leo02 in his natal 12th house of Politics and Karma) adds intensity to the issues and may indicate that Donald Sr will impose himself upon their quarrels and make a different choice altogether. After all, a wise King Solomon Big T ain't, and he doesn't seem to think very highly of either man (Kushner a "girl" and Don Jr "dumb"?).

Adding to their power-grabbing is the glop of Don Jr's powerful Pluto-NN conjunction (in his natal 4th house) conjoined to Kushner's Jupiter-Saturn conjunction. 'Powerful contacts' yes, even 'tragic destiny' perhaps, yet financial considerations are involved as well thanks to Jared's Jupiter @10Lib04 conjunct Don Jr's North Node, a karmic link (NN) in the financial, banking, and campaign donations departments (Jupiter) with suggestions of Politics and legal matters. And of course, if money worshipper Trump Sr isn't a Jupiterian figure, who is? (His nibs is also a Mercurial Uranian figure but his boundary-breaking Jupiter was stationing at his birth, turning Direct--and over-promising Jupiter loves to broadcast his 'ideals' especially in campaign mode.)

Now on another level, it seems that Don Jr and Jared Kushner were born with natal Moons in opposing signs across the Virgo-Pisces victim-savior axis so emotionally, they have different 'reigning needs'. With Don Jr's Virgo Moon, practical considerations are uppermost with head ruling heart and a fussy love of tidiness; Jared's Pisces Moon can be optimistic but is subject to mood changes and susceptible to external influences, tending to 'soak up' the emotions of those around him. Being in the same room or standing near the volatile Mr. Trump must be difficult for Jared but of course his Capricorn Sun adores the authority to control and manage.

Well, there's my small sketch of two fellows prominent in the life and times of Donald Trump, a man who intends to cheat his way again into the Oval Office as one of those 'success-at-any-cost types of culprits. Conservative rolls are decreasing these days due to age-related attrition so can you imagine the fate of either Don Jr or Jared heading the 2020 Campaign if their candidate should lose? I wouldn't want to be in their light-weight loafers, would you?!

Related Posts include but are not limited to

: June 18, 2019: Trump Opens Campaign 2020 in Orlando; Dual Natal Charts of Ivanka and Jared; and, The Horoscope and Eclipse of Eric Trump in the 3 South Saros Series which repeats on December 26, 2019 @4Capricorn and may return its difficult themes into his life circa 2019--2020 for the cosmic opportunity of making karmic progress this time around.
Posted by Jude Cowell at 12:06 PM

Brilliant, as always, Jude! My fave contacts include the potential for a Finger with base of Jared's Moon-Chiron, apex Don Jr's Pluto=Jared's emotional need to wound Don in his 'power spot', and the opposition of Jared's 29 deg Venus with Don's 29 degree Jupiter, maybe suggesting Jared's money crisis conflicts with Don's social crisis--I'm guessing those are the life areas where they privately criticize each other--Don sees Jared as a money-obsessed hoarder, Jared sees Don as a social loser! Not to mention Don's Pluto-Neptune (w/ Uranus at the midpoint)as base to a Finger apex completed by Jared's Chiron--to me that might describe a deep power need in Don, one that drives fantasies, of 'surprising' Jared with a wounding. Gotta say, this is a treasure trove--thanks so much for sharing!

Julie a great analysis Thanks for adding your insights! They're quite a gang of manipulative, greedy varmints aren't they? And bossed around by the biggest old cuss of all! jc