As you know, Donald Trump is an "eclipse baby" because the day he was born, June 14, 1946, a Lunar Eclipse perfected @23Sag04, just a few hours after he was born. This degree is near Trump's natal Moon position 21Sag12 (which conjoins his natal South Node and we've heard there was an estrangement from Mother on day one which the Lunar Eclipse and his Saturnian South Node confirm--perhaps a health issue for her, and/or for him, or perhaps a difficult birth, one may assume). Be that as it may or may not be, an eclipse child will have an eventful life and Trump certainly has had that.

The following horoscope is set for Washington DC (the Capitol Building actually--my bad but basically the same as the White House--if he still resides there by then!) when a Solar Eclipse in the difficult 4 South Saros Series manifests upon Trump's Lunar Eclipse degree and thereby activates it: 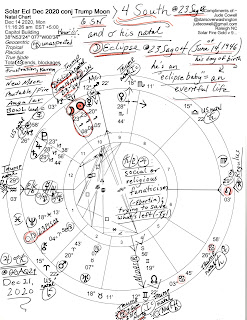 This cosmic event is significant by degree although how so is anyone's guess. To me it denotes that 4 South themes will affect Trump on a personal level and his flaws and foibles in those departments (relationships and finances) will be more starkly cast under a public spotlight and/or there will be some type of closure or culmination in his life possibly in the realms of relationships, partnerships, and/or marriage (Sun to Moon). Plus, inconvenient secrets may be uncovered or leaked to the press.

Yes, scandals and changes of direction are always potentials with 'wild card' eclipses and here one disruptive eclipse is piled upon another creating a cosmic time link between 1946 and 2020 and bringing a boatload of karma his and our way. Of course, finances, resources, budgets, and investments are also suggested by the 4 South Eclipse ('strong emotional feelings about money and/or relationships; obstacles; sudden endings of relationships; a feeling of fate'--Brady). Then when we search for events of 1946 we find that on Trump's day of birth, the Bernard Baruch Plan was proposed to the United Nations. This proposal involved an international organization for the regulation of atomic energy, plus, the UN itself is brought into the 2020 eclipse picture along with post-war America and Germany, and potential threats and disruptions to various other international alliances and networks that Trump works hard to destroy on behalf of his pal Putin. But Trump 2020 + atomic energy?? Not an equation fit for musing upon in my book.

Meanwhile, many things positive and negative can and will happen between now and December 2020. Of course, one scheduled event is the 2020 General Election on November 3rd, hints of which may very well be indicated in the December 2020 eclipse chart, above, whether Trump games the electoral system as in 2016 or not.

So if you discover any such hints, please let me know, will you?! Plus, you my wish to check out a related post: Is Election 2020's New Moon Prior Predictive? Your on-topic comments and shares are always welcome!

Note: Stars Over Washington has its own Facebook page!