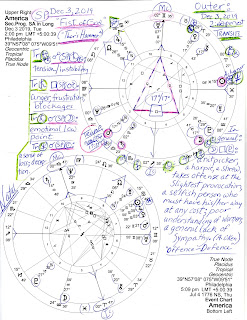 Astrologer Alice Portman has worked with the volatile and dynamic pattern called a Thor's Hammer, aka, a Fist of God, and here is a discussion of the pattern for those who are curious. As you see in the upper right horoscope pictured here, a Thor's Hammer pattern has formed in America's Secondary Progressions ('SP') with a Moon-Mars square at its base pointing toward our national progressed Midheaven, the Career-Public-Reputation-Social-Status Point (2Gem25).

As you see, America's totem planet of war and revolution, Uranus (SP @7Gem07), will be taken across our SP Midheaven in 2024 but that topic is beyond the scope of this post. Suffice to say that dramatic adjustments will be needed and major changes of direction should be expected via disruptive, chaos-loving Uranus to MC. (Note that this December 3, 2019 SP chart is based on America's July 4, 1776 5:09 pm LMT Philadelphia, PA horoscope; a different hour will give slightly different timing.)

On the left of the chart are a few of the December 3, 2019 transits (2:00 pm est) to our SP planets (same date, same hour) including transit Uranus opposite SP Saturn, Saturn square SP Mars and conjunct SP Moon (legal eagle Saturn aggravating the Hammer), and Neptune still 'covering for' the SP Sun (the leader) with brief indications for each. You'll discover more factors, I suspect. Yet, as we know, Astrology adds the element of timing and assures us that this situation is only temporary!

But for now, we're in a pickle, but I won't mention the conditions and situations of turmoil we find ourselves in these days for you know all too well what they are. And if you look on the right center of the chart, you'll see a few general notes about the Moon-Mars square and you may agree with me that Donald Trump's selfish, nitpicking nature is described ("Offense-Defense" - Alan Oken). My observation is that a Moon-Mars square denotes someone who thinks they're the only ones who deserve to become furious!

Thing is, the Thor's Hammer (with royal Regulus and Apollo rising, he probably thinks of himself as a godlike "Thor"--and as a "hammer') pattern does a pretty good job of describing Big T as well: volatile, willful and hard to discipline as a child (plus, he still behaves like a toddler so --), and continues to act out stressful feelings by rebelling against society from which he receives severe criticism. Plus, there's no third planet to act as an outlet for the blocked, bottled up energies--only the Midheaven as noted, above, which represents the World Stage on which Trump regularly makes a dumblehead of himself while embarrassing America, lowering our national reputation even further, and subjugating our nation to pipsqueak Russia.

And so, my fellow Americans, as the Trump impeachment inquiry grinds on, we as a collective have progressed or evolved to a state described in part by a Thor's Hammer pattern and by the cosmic midpoint picture of Moon-Mars = MC: "self-promotion" and/or, "getting things off the ground" (Tyl) but also, on a lighter note, of "a woman with strong principles" (Ebertin)! Now that sounds better, doesn't it?

Recommended for more information on progressions is Lynn Holt's Secondary progressions as an indicator of inner growth.

Neptune in mid-Pisces conjoins fixed star Achernar keywords: 'crisis at the end of the river'. Neptune rules water including oceans and rivers, plus, floods and loss. jc

Please make yourself at home here, dear reader. Scroll down to Join, Follow, or Subscribe as you wish, and a Thank You to those who do.
Original content and horoscope analyses written primarily by yours truly, a 'recovering' DC resident. You'll find additional content (videos, audios, article links, quotes, excerpts, etc) by various authors and others who express their own views which are not necessarily shared by SO'W.
And note that all content herein cannot be vetted by a lone blogger and is posted in a spirit of discussion and the furthering of alternate opinions along with a populist, common-good 'peek under the hood of Politics' focus made possible by the ancient art and lens of Astrology!
Also note that information given here is not intended to be applied to personal horoscopes but deals with broader societal issues and the positive and negative tendencies of politicians and other public figures.
Please consult your horoscope or your own astrologer for personal details concerning your natal chart.
Jude Cowell (c) 2005 - 2021
~ Coh' wul (not like Simon's or Devin Nunes' Cows) ~
~ and 'Jude' is for Judith! ~
Tweet me @judecowell
Visit my FB group
Stars Over Washington Reports
and perhaps browse my Fine Art America
Art Portfolio 24/7
New! Additional Political Astrology content will be turning up soon for Patreon supporters of SO'W so you're invited to get in on it if and as you wish! Just look for Stars Over Washington at Patreon.
jc
ps: please pardon that some article links and videos in older posts are no longer live--SO'W enters its 16th year on October 16, 2020! Also, some content providers may have removed their videos in a snit of...well, for whatever reasons, and some content may simply have expired. jc
Category: Entertainment
Banner image: Washington Monument, Washington DC
Ad Note: Jude Cowell is a participant in the Amazon Services LLC Associates Program, an affiliate advertising program designed to provide a means for sites to earn advertising fees by advertising and linking to Amazon.com.