Perhaps it may be useful for a reader or two to view on the same page both the Capricorn Solar Eclipse that ends 2019 (December 26) and its accompanying Cancer Lunar Eclipse which opens 2020 (January 10) so here ya go: 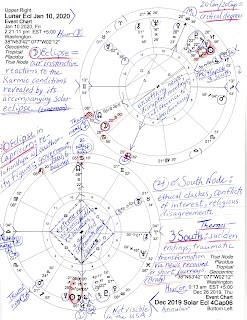 Enlarge the image if you will for there are some basic eclipse notes penned on the charts including a few of Trump's natal placements, and in the center of each horoscope are penned brief indications based on prominent midpoint pictures (via Munkasey and Ebertin).

Also listed are the 3 South Solar Eclipse themes and potentials for Jupiter's conjunction to South Node which can sometimes resemble a Jupiter-Saturn conjunction. Jupiter-SN reveals karmic conditions such as ethical clashes, conflicts of interest, and religious disagreements. Jupiter @5Cap20 conjoins the IC of the Solar Eclipse chart suggesting some measure of protection on the domestic front (and/or in farming, real estate, mining) however, Jupiter opposes US natal Jupiter (5Can56) (a negative if temporary indication) and as you see, Mercury accompanies the January 2020 Lunar Eclipse at the same critical degree of 20 Capricorn. The Moon-Mercury opposition suggests potentials for changes of mind, emotional challenges, conflicting opinions or ideas, and/or scheduling glitches.

Jupiter first squares the Ascendant (where Trump's natal Neptune rises = unreality and delusions, emotional excesses, promoting "the big picture") and identifies someone bombastic, pompous, and "holier than thou" who spreads himself too thin. Next Jupiter by transit conjoins the South Node (the 'tail of the dragon') as noted, above. The Great Benefic has moved beyond an expansive optimistic conjunction with the Sun although the Sun by transit will catch up with Jupiter (December 27 at 1:25 pm est) suggesting something positive coming (or at least expansive!). This Solar Eclipse occurs after Jupiter's inspirational trine with Uranus, the unpredictable planet which here is in the 8th house of Shared Resources, Credit, Debt, Insurance, Transformation, Big Business, Death, and the Occult suggesting flourishing fundraising and group activities.

Previous SO'W posts concerning the 2019 Solar and 2020 Lunar Eclipses individually are available here, here and here, plus, check out a List of Solar and Lunar Eclipses from July 2019 through 2022.

Obviously, Sabian Symbols for the eclipses, planets, and points in the above horoscopes are revealing but I shall leave it to you, dear reader, to check them out for yourself. Hopefully this combined cosmic picture is helpful to you during this period of sudden changes of direction and traumatic karmic conditions which offer the Collective multiple opportunities to better handle current issues for we must reap what's been sown in the past.

Please note that in my Political Astrology posts I work with eclipses via their degrees, themes, and historical linkages ('cosmic echoes'). The December 2019 solar eclipse is annular (not as strong as a Total would be) and is not visible in the US which also reduces the strength of its possible influences within our society. However, all eclipses are known as 'cosmic blinks' and 'wild cards of the Universe' and in similar fashion to quirky, chaotic Uranus, eclipses herald changes of direction, disruption, and the potential for secrets to be suddenly revealed. Additionally, themes of the 3 South eclipse are significant in a Plutonian way and may pack somewhat of punch in the areas ruled by governmental Capricorn, the Saturn-ruled Zodiacal sign cast into a bright cosmic spotlight (along with Moon-ruled Cancer) on into 2020, a year full of major game-changing planetary conjunctions of Saturn-Pluto, Jupiter-Pluto, and Jupiter-Saturn. jc