Winter Solstice 2019 and a Scorpio Moon 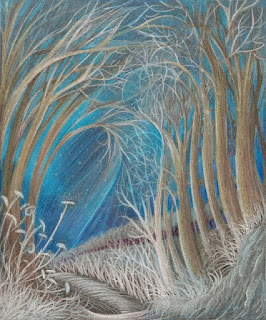 December 21, 2019: Between the House Vote to impeach Trump (December 18th) and family holiday plans and celebrations there's been no time to publish the Winter Solstice 2019 Horoscope so I'll add a few chart notes here along with my drawing, Blue Winter's Path.


Sun to 00Cap00:00 at 11:19:40 pm est (Washington DC horoscope); 3rd quarter Moon (crisis in consciousness phase), solar hour, with Sun in 4th house focusing on Real Estate, Mining, Roots, the Domestic Scene, Security, and Endings, and Moon @9Sco00 in 2nd hou$e leading a BOWL shape of planets. We The People are feeling Scorpionic these days and on into 2020 at least until Spring Equinox 2020 (March 19 with Moon in Aquarius). And naturally, intense, brooding Scorpio involves such realms as research, investigation, spying and surveillance, Big Business, death, the occult, and regeneration. Death and regeneration resonate with the 'traumatic transformation via news received or short journeys' and 'sudden endings of associations possibly with a young person' vibes of the December 26, 2019 3 South Solar Eclipse @4Cap06 with Capricorn's governmental, legal, business, investment, authority, and accountability connotations.

Also in 4th house with the Sun are protective, expansive, broadcasting Jupiter @4Cap24 (heralding the Christmas 2019 Eclipse which Jupiter will conjunct), Saturn @20Capricorn, a critical-crisis degree, and powerful Pluto @22Cap04 sitting upon the natal Vertex of Donald Trump (22Cap51 = karmic encounters) where the Saturn-Pluto Conjunction will perfect on January 12, 2020. Saturn's position at Winter Solstice also portends the January 10, 2020 Lunar Eclipse @20Cancer conjunct Castor, a revealing lunar eclipse which may provide information about a Senate Impeachment trial in early 2020. And obviously, the January 10th Lunar Eclipse is the Syzygy Moon of the Saturn-Pluto rendezvous approximately 2 days later plus, the Christmas 2019 Solar Eclipse is the karmic conjunction's Prenatal Eclipse ('PE'). Follow the link to view both eclipse charts.

Additionally, the January 2020 Lunar Eclipse helpfully provides clues concerning our collective reaction to the December 2019 Solar Eclipse conditions and events with the two eclipses emphasizing the Cancer-Capricorn security axis and its home vs career issues and concerns. Sign rulers Moon and Saturn suggest ambition and strategy although some indication of depression or emotional suppression may be involved--and yes, the harsh Saturn-Pluto Conjunction in January may add to such difficulties for some folks depending on how the conjunction affects their planets.

Also in the Winter Solstice 2019 chart is a hint of freedom-closeness issues (Moon-Uranus oppo) along with the lunar-led BOWL pattern's tendency to suggest people on a mission and/or the advocacy of a cause (Jones). (Impeaching and removing Trump perhaps? A majority of Americans want that, please). And naturally, intense, brooding Scorpio involves such realms as research, investigation, spying, surveillance, Big Business, Insurance, Debt and Credit, death, the occult, and regeneration. To me, 'death' and 'regeneration' resonate with the 'traumatic transformation via news received or short journeys' and 'sudden endings of associations possibly with a young person' vibes of the December 26, 2019 3 South Solar Eclipse @4Cap06 with Capricorn's governmental, legal, business, investment, authority, and accountability connotations. Note that 3 South eclipses have occurred in the years 1911, 1929, 1947, 1965, 1983, and 2001. And here's what I hope is only a cosmic curiosity: the 3 South Solar Eclipse of November 1, 1929 perfected @9Scorpio, the position of the Winter Solstice 2019 Moon.

So as you can see, the "Black Tuesday" Crash of 1929 occurred under the influence of the close-enough 3 South Eclipse in 'Big Business' Scorpio.

Another significant factor in the horoscope set for DC at Winter Solstice 2019: 20Vir34 rises which brings up fixed star Denebola (out of the mainstream; to go against society) and this star conjoins the natal Midheaven of Joe Biden. Is there a 2020 Campaign message about candidate Biden's aspirations here? What do you think?

However, the chart's Midheaven @19Gem15 places Trump's natal 10th house trio of Uranus-North-Node-Sun smack dab upon the most visible point of the chart and gives Winter Solstice 2019 Geminian and Uranian flavors with all that Mercury-ruled Gemini and the disruption and radical reforms of shocking Uranus (Trump's guiding planet). So in relation to Uranian Trump's conduct, we may expect a continuation of duplicity, quirkiness, deception, chaos, upsets, change, superficiality, insults, protests, many communications, gossip, commerce, trade, travel, new and fluctuating ideas and plans, to spew out of his quixotic, sneaky mind.

Yes, there are several other chart factors of note, but let's close with a few indications of the Earth-Water Sun Capricorn-Moon Scorpio combination of energies which necessarily must involve the signs' malevolent rulers Saturn, Mars, and Pluto. As a trio, these three karmic culprits suggest Trump's enraged, brutal, even murderous, natal midpoint picture of Mars-Saturn = Pluto. That he intends to take revenge for the Democrats' vote to impeach is a given especially considering his natal Mars rising with royal star Regulus (success if revenge is avoided; if not, all that been gained will be taken away). From all indications (plus, his retaliating nature), revenge will not be avoided. So for now, Big T is like a cobra ready to strike. And the Winter Solstice 2019 North Node @8Can25 in 10th house (the head of the dragon) continues to direct us toward Trump's natal Mercury (8:51) while transit South Node (the tail of the dragon) is ready to swipe transit Jupiter (conflicts of interest; social and ethical aims clash with prevailing customs; and/or obstacles due to bad timing--Sakoian and Acker.)

But back to the Sun-Moon combo of energies - first, an apt quote from Clement Atlee, rival of Churchill, who was probably born under the influence of the Capricorn-Scorpio personality blend: "Democracy means government by discussion but it is only effective if you can stop people talking." I shall assume he was criticizing government's tendency toward 'all talk and no action' (aka, all hat, no cattle) which gets little if anything useful done. Excessive propaganda and overblown boasting fit in there somewhere.

Yet Earth-Water is a practical, nourishing combo with the innate wisdom to know what is important and what is not. Sun Capricorn-Moon Scorpio (best results when leaders and the people work together) supplies courage, dedication, and a "heroic strength of character." The ambition of Capricorn blends with Scorpio's passion and emotional self-control which often creates an attraction to law and social reform, plus, the pair supplies the knowledge that we'd better be prepared for future attacks. Knowing where we stand on significant issues is a must which relates quite easily to campaign proposals and policies touted by the 2020 candidates. All of them including Trump if he manages to stand for re-election. Common sense is definitely a feature of this blend so, personally speaking, if voting for Trump in 2020 (which is a vote for Putin) seems like common sense to you, Lord please help America.