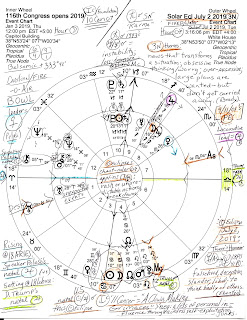 Not to Worry But to Inform

Here you see a re-posting of the DC Horoscopes of the opening of the 116th Congress on January 3, 2019 at noon est, Capitol Hill, Washington DC (inner) with the 3 North July 2, 2019 Solar Eclipse @10Can37 (outer) conjoining the IC of the 116th Congress. Of interest financially is Speaker of the House Nancy Pelosi's natal Jupiter @18Aries opposing Trump's natal Jupiter @18Libra in rising and setting positions in the chart (denoting their wall-funding stand-off most likely along with the Trump Shutdown, and then $ome), plus, the fact that a 3 North Solar Eclipse @18Taurus preceded the 1929 'Black Tuesday' Crash, with acquisitive Taurus, sign of money, growth, and possessions, snorting like the 'Bull of Wall Street' and an apt symbol of Wall Street greed and gold-worshiping.

Now as you may know, a previous SO'W post displays both DC Horoscopes of the 3 North July 2, 2019 Solar Eclipse @11Cancer and the July 16, 2019 Lunar Eclipse @24Capricorn with wealth-hoarder Pluto in Capricorn ('The Dictator', aka, the 'Underworld Crime Boss' and/or the saboteur of governments) creeping nearby and getting ready for his tryst with karmic Saturn @22Cap46 on January 12, 2020--conjunct the natal Vertex (fated encounters) of Mr. Donald J. Trump.

Will the karmic imperative of 'reaping what was sown' prevail?

3 North themes: news involving a young person and or that transforms a situation; information causes worry or obsessive thinking; large plans are wanted which can be positive but don't get carried away (paraphrasing Brady's 'Predictive Astrology').


For more info, follow the 'July 2019 Eclipses' link for the 3 North Eclipses, one of which was the Prenatal Eclipse ('PE') of 9/11/01 for it perfected as the 2001 Summer Solstice Eclipse @00Cancer, one of the four Cardinal World Points of Manifestation where prominent events tend to happen on the Global Stage.