For the cable-TV challenged, here's a link to the MSNBC Live Stream of tonight's Democratic Primary Debate at 9:00 pm (est) in Las Vegas, Nevada. As you've heard, candidate Michael Bloomberg has qualified (purchased) to be on the stage tonight so it should be quite a slug-fest--between Democrats. 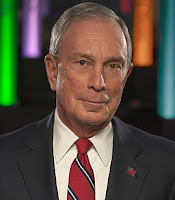 And here's a view of the natal horoscope of Michael Bloomberg RR: AA or check out a previous SO'W post featuring the (hopeful!) link between his and Trump's natal charts with Bloomberg's tough, tenacious Saturn-Uranus Conjunction sitting atop the natal Midheaven of Donald Trump and his natal Mars in stubborn Taurus nearby.

And so, in the realms of Astrology we find that both media-lovers are wealth-driven, ruthless, and vindictive which to me would seem rather an equal match-up in November if Democratic voters will give Bloomberg's past flaws and mistakes a pass. After all, Trump gets many such a passes every single day from his supporters and from the complicit Republicans who helped create the orange monster so why not the less objectionable Mikey B?

But as for tonight's pivotal political performance, we know that Mr. Bloomberg hasn't debated anyone since 2009 during a NYC mayoral race so we'll see how this slug-fest proceeds on this important night for Michael Bloomberg and his 2020 candidacy which, if nominated and victorious, may result in the American people trading one money-laundering oligarch with imperial dreams for another one (who's similar but not in every way). Of course, debates are the province of communicator Mercury now Rx in Pisces and conjoining Bloomberg's natal South Node which suggests temporary potentials for original ideas, expressing ideas that are ahead or behind the times, stolen ideas, and/or, that when he speaks no one listens!

And with the Debate Sun so recently entering the sign of Pisces (February 18 at 11:57 pm est) and tonight's Moon in Saturn-ruled Capricorn, a famous quote from a Founding Father, our first President George Washington (whose natal personality blend this is!) seems appropriate:

"Associate yourself with men of good quality if you esteem your own reputation; for 'tis better to be alone than in bad company." Perhaps tonight mention will be made of Trump's tendency to surround himself with fellow criminals, both imprisoned and on the loose--and with sleazy men of low character. Birds of a feather.

"Our differences are politics. Our agreements, principles."

Liz Warren was on FIRE and went after Mr. Calm, Cool and Collected. His Aquarian self looked stunned. She seemed in her element, and made me want to see her debate DT. Maybe with today's Sun trine her natal sun, and her Mercury in Gemini stimulated by Pisces, she was pivoting with her Uranian nature and extra fleet of foot. Maybe Bloomberg and the rest were delayed by the currently retrograde Mercury? She was standing up for the underdog in her very Cancerian way, with a passionate story for every point. She's come a long way in this campaign. I'd not count her out just yet. Emotion is stronger than intellect (always) and the electorate need to be inspired. We shall see what the coming days bring.

Great points Sharmaine! Senator Warren is my original favorite and I would be more than pleased to vote for her!! jc