A Brief Look at the Aries Total Eclipse of April 2024

In the years 1878 and 2017, America experienced what many call 'Great American Eclipses'. You'll remember the eclipse of August 21, 2017 @29Leo and its path of visibility stretching across America from Oregon to South Carolina--and Trump removing his safety glasses to stare directly up at the Eclipse which did, after all, conjoin his natal Ascendant and Mars rising. Is it my imagination or is Trump's right eye is looking a bit weak lately? As you'll see on the eclipse horoscope, below, 'blind spot' Chiron is conjoined (or 'eclipsed') by the April 2024 Solar Eclipse--and eclipses are often known as "cosmic blinks"! Plus, in Astrology Chiron is also known as the wounded healer, The Key, and the Christ archetype; there are several other health indications in the horoscope if one enlarges the image and reads them.

So the third Total 'Great American' Solar Eclipse, visible in the US (see link, below), manifests on April 8, 2024 @19Aries in the 8 North Saros Series. An interesting fact is that the 2024 eclipse path of totality will intersect with the path of the August 2017 eclipse at Makanda, Illinois, plus, other cities will be involved as well and are handily listed here. Funny that a Great American Eclipse 2017 Horoscope happened to be published on SO'W in 2017 set for--Makanda, Illinois and Mercury was Rx then, too, but in its own sign of Virgo. 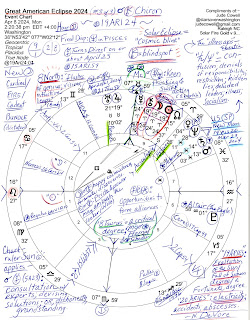 Although Symbolic There's Another Cosmic Event in 2024

Penned on the chart above is America's Progressed New Moon ('SP'--in blue) which symbolically perfects on March 25, 2024 @19Pis26 and in April is conjoined by the eclipse's Saturn-Neptune and Mars-Neptune midpoints. As you know, Saturn-Neptune is the "illness axis" and can be a marker for Socialism (and for invisible government) while Mars-Neptune tends toward infections, epidemics, or even help at the right time! (Ebertin).

And perhaps it's worth noting that prior to our SP New Moon in Pisces, America enters the symbolic Balsamic phase on November 28, 2020, the risky 'dark of the Moon' period (similar to entering a dark tunnel) when anything can happen and with SP Moon @1AQ07 conjunct our SP Pluto @29Cap27 and SP Icarus. This is also conjunct US Inaugural Sun--assuming there's a US president by then. If any reader wants to see America's Balsamic horoscope, leave a comment with this post and I'll attempt to publish the SP chart with transits to it. But for now, it's back to the 2024 eclipse horoscope:

Yes, medical breakthroughs could be forthcoming (if not before! plus, Jupiter and Uranus conjunct @21Tau50 on April 20/21 depending on your time zone = lucky break!) for the Great American Eclipse of 2024 falls into the 8 North Saros Series with themes of: 'flashes of genius; visions; intuitive leaps, insights, inventiveness' (Brady's Predictive Astrology). Inventiveness gains some support from the intellectually flexible, technology-savvy Mercury-Uranus midpoint atop the eclipse's Midheaven ('MC' @7Tau59--conjunct two fixed stars: danger-prone Hamal and Schedir the Queen). Mercury-Uranus at MC suggests professional folk such as physicists, mathematicians, cosmobiologists, researchers, and inventors who are able to think about a matter keenly and engage in a swift course of action.

Of course, Mercury-Uranus-MC may also indicate those who spout propaganda during emergencies. But we're suffering that already, am I right?