Jupiter Hearts Pluto 2020: A Grand Year for Plutocracy and Exploitation

A previous post appeared here on SO'W concerning 2020's three conjunctions of financial planets Jupiter and Pluto in Capricorn. Follow the link to view a tri-wheel of all three conjunction horoscopes set for Washington DC. Their conjunctions range from 24Cap53 (April 4, just passed), to 24Cap06 (June 30), and back to 22Cap52 (November 12), a highly fertilized degree area of the Zodiac this year. Of course, this area of Saturn-ruled Capricorn relates to banking and investment, bail-outs-loans-debt, government, laws, and other Saturnian realms such as authority, systems, structure, order, The Establishment, conservatism, Capitalism, management, stability, the past, and the status quo. Add Pluto and we have powerful religious or military figures, wealthy CEOs, prominent judges, organizers of large-scale projects, people with power or money to dispense, and plutocrats exploiting the masses.

Meanwhile, as the novel Coronavirus pandemic has laid bare, the time has come for 'the old' to be replaced by 'the new' and for those who 'speak astrologese' this is made obvious astrologically by the multiple Great Conjunctions of planets in 2020 that begin ticking away their new cycles in timely fashion. And as 2022 nears, many can feel Pluto approaching his natal degree in the US founding horoscope of 1776--the old order now turned gray around the muzzle. Major transformation now in progress!

Plus, Jupiter and Saturn Start Over Again in December

Of course, the Great Mutation (Conjunction in AIR) of societal planets Jupiter and Saturn will arrive at Winter Solstice 2020 (conjunction horoscope shown) to bookend the year and the era with a fresh beginning in the expansion-contraction realms of life. Plus, their Conjunction joins with America's POTUS Sun (that's US Inaugural Sun @00AQ+ since January 20, 1937 when Freemason FDR changed the Inaugural date from early March with its Pisces Sun).

So what might Jupiter-Saturn = POTUS Sun bring? Will positive leadership be shown? Must boasting from the White House continue? Will the US government's traditional checks and balances finally be crushed? How about the infiltrated, weakened US Justice System? Perhaps we'll find that leniency vs harshness issues turn up in legal, social, and/or economic systems. At the least, we can expect changes in government and/or repression based on morality and ethics (ethical asteroid Pallas conjoins the November Jupiter-Pluto conjunction--and the natal Vertex of Donald Trump). Of course, Pallas also signifies the daughter so Ivanka may be prominent in a new way come late October or early November.

Now below is the third of three conjunctions on November 12 of Jupiter and Pluto, a Plutocracy pair of speculation and inflated power cravings. Obviously, the blending of their energies relates to current bail-outs and other financial, social, and religious happenings going on in 2020 but this November horoscope catapults their energies into 2021 and remains active for about the next 13 years--actually all three of their Conjunction horoscopes remain active with the 13 years divided into quarters of influence. This method gives precedence to the April 5, 2020 chart for the next 4+ years until 2024 or so. (Their next Conjunction will be a one-fer on February 5, 2033 @14AQ50.)

So please enlarge the image if you wish to read my messy study notes for I won't repeat them in this text: 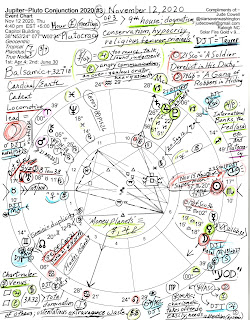 Significant is that the November 12, 2020 Jupiter-Pluto Conjunction @22Cap52 is joined by a transiting midpoint of Mercury-Mars. This duo has political implications in the realms of debate, oration, and discussion. It also relates to powers of thought, determination, achievement and the spirit of enterprise. A few potentials of the midpoint pictures are penned on the chart, upper center, but there was no room to add: 'quarrels, judgments, rash actions, lawsuits and controversies, obstinacy', and/or 'retaliation' (Ebertin).

Lower right you see a 'YOD' or a semblance of one for one point of it is the Ascendant rather than a planet. However, midpoint pictures may be read with the Moon--leader of a Locomotive shape ruthlessly determined on success--Venus, and Trump's natal Jupiter because the Moon conjoins his 2nd house Jupiter. So we have potentials for:

Neptune-ASC = Venus:'showing dislike'; with Moon: disharmony; and DJT's Jupiter: 'the urge to cheat others, or, cheating others'; 'loss of money and/or possessions' (Ebertin).

And if you're looking for the applying aspects of chart-ruler Venus you'll find them, lower left, with a few possibilities. Yes, wastefulness and extravagance seem to be on the Jupiter-Pluto menu--but also total dominance over others.

And finally, the Prenatal Solar Eclipse in the difficult 4 North Saros Series occurring at Summer Solstice 2020 (@00Can21) influences the 2nd house of Money, Possessions, Values, Earning Ability, and the National Treasury with 4 North themes of: 'restriction, restraint, inhibition, separation ("social distancing"?), illusions, events that block, misjudgments of strength or the situation; wait until the eclipse passes before taking any real action' (Brady) which on one level I take to mean that our current sequestration measures should continue through the rest of 2020 and perhaps beyond. But with impatient Mars-rising Trump on the loose, what are the chances that caution will rule the day?

Now lots more info is embedded within the November 2020 Jupiter-Pluto horoscope and I have confidence that you, dear reader, will discover it and perhaps share your insights here with others. It would be much appreciated by yours truly! jc