February 5, 2018: If there exists an America in 2024, below is her next Secondary Progressed (SP) New Moon @19Pis26 on March 25, 2024 which symbolically times a new cycle of activity and experience. Of course, year 2021 begins a 'dark of the moon' period when anything can happen so I'm not predicting here, just posting our national SP New Moon chart for those who may wish to view it in early mode! And of course, with an SP or transiting New Moon, things take a while before the proper direction is clear.

Most of my current notes and its basic details are penned messily on the chart so hopefully you can enlarge the image for better viewing. Added are the dates and degrees of our country's Previous SP New Moon in 1994 (19AQ51), and this SP New Moon's Previous SP Full Moon (4Vir10) on or about December 25, 2008 which marked the time when the US had extended into the wider world as far as she could reasonably and naturally go. As you know, Washington DC's preparation for this important karmic condition was to continue indulging in the same old globe-conquering madness, wasteful spending, embezzlement from public coffers and various other financial crimes, weakened systems and agencies of government, lowered standards in international diplomacy, foreign entanglements and conflicts of interest that the Founders warned against, and mayhem and corruption that would horrify the American people if the truth were known. Oh well. One day all will be known!

Around the chart in blue: transits for the SP New Moon's date, time, and location. 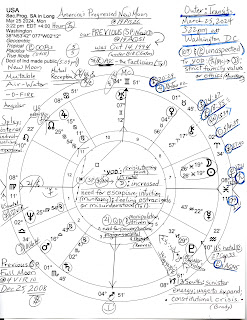 Note that in the transits both Mars (2Pis11) and Pluto (1AQ45) are out-of-bounds and up to who-knows what. And that US SP Jupiter (15Can11) has been retrograde by progression since 1905 which figures directly into the formation of the 'Federal Reserve System of Banking', aka, the transnational central bank take-over of the US government. US SP Jupiter Rx also relates to America's tiresome tendency to over extend and grab what isn't hers--and a major change of direction and disturbing philosophical shifts were also shown by our nation's Jupiter function turning inward @15Cancer--directly upon the natal Ascendant of the money-guzzling Pentagon.