May 2020 Jupiter Direct Stations on US Pluto: nwo

April 20, 2020: Below is the DC Horoscope of the moment on May 14, 2020 that transit Jupiter @27Cap14:25 Stations Direct upon US natal Pluto (@27Cap33 Rx natal 2nd hou$e of the National Treasury) with implications of a 'new world order' now forced into place and the additional gaining of power.

According to Reinhold Ebertin, on May 14th Trump will be "acting under the influence of others, showing weakness, and laying himself open to being led astray or corrupted" (Sun = Neptune-ASC). Yes, this has already been the case for years, I know! For one thing, he owes China, and China owns the debt of the US. Precisely what the Founders warned against.

So please enlarge the image if you wish to read my study notes: 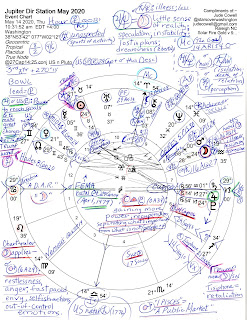 And on the same subject:

Remember in October 2018 when Trump issued his first Emergency Alert via FEMA to the cell phone users of America? My suspicion is that we'll be hearing alarming messages again through the same channel. The 'new world order' ('NWO') aka, One World Government, has long been a subject of complaint on Stars Over Washington yet the following video contains particularly sensitive topics so a Warning Advisory is necessary. Why so sensitive? Because it asserts that Trump is no longer playing president because Someone Else is in charge--guess who?

Note that on March 13, 2020, Trump declared that the Covid-19 outbreak "constitutes a national emergency, beginning March 1, 2020". According to the video above this is when Trump gave over control of the US to FEMA and is no longer acting as president.

Astrologically, the change of rulership on March 1st falls under the sway of the February 23rd New Moon @4Pis29 (America's Progressed Sun degree in December 2008--our Progressed Full Moon when the US had reached into the world as far as she could go) while Trump's March 13th declaration came after the culminating 'Super' Full Moon of March 9, 2020 @19Vir37. And of course, Virgo-Pisces polarity is the victim-savior axis with all earthly and cosmic events so far this year falling under the auspices of the 3 South Solar Eclipse of December 26, 2019 (4Cap06) with its 'traumatic transformation through news received or short journeys undertaken; sudden endings of relationships' vibes (Brady).

Then there was the March 24, 2020 New Moon @4Ari12 which culminated with the Full Moon of April 7th/8th @18Lib44 and directly spotlighted Trump's 2nd hou$e Jupiter @17Lib27. Next up will be the April 23rd New Moon @3Tau24 conjunct the Discovery of Chiron degree.

That's a wild video.
here's an article on a documentary on Erik Nelson:https://www.salon.com/2017/07/05/a-grey-state-documentary-trailer/

I prefer not to believe that video is valid.

Anything can happen though.