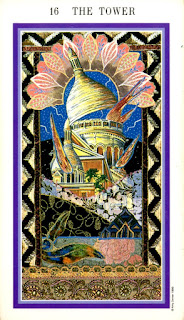 As you know, not all solar eclipses bring negative themes to events but all can disrupt society and our lives in a manner similar to the erratic planet of rebellion, Uranus--even those containing positive themes. Naturally, other planetary factors are always involved as well and are part of every eclipse picture and influence. Typically we may look at historical events during the year that a particular eclipse occurs for clues about its potential influences and the change of direction that often ensues in some area of our lives.

In a previous SO'W post we discussed The Tower Solar Eclipse which perfected @18Leo41 on August 11, 2018 in the 2 New North Saros Series. By degree The Tower Eclipse of 2018 activated the August 11, 1999 'King of Alarm' Eclipse of Nostradamus fame, one of the signposts that announced the coming of the New Millennium, when the 'winds of war and strife' were set loose upon the Earth. If you wish, follow the link for a view of the August 2018 2 New North Solar Eclipse Horoscope which is set for Washington DC. For as you may already be aware, 2 New North themes mimic Tarot card #16 pictured, above, and involve 'complete collapse of lifestyles and plans', 'loss', and 'rebuilding starts after the dust has cleared' (Brady). Does this describe America's and the world's current condition?

For comparison, an example of a 2 New North Solar Eclipse is the one that manifested in 1964 (@17 Cancer) as the Prenatal Eclipse ('PE') of the ill-considered, deceitful, racketeering Vietnam War. Loss of lives and lifestyles in Vietnam and for the US and its alliances, plus, loss of funds from America's National Treasury are merely some of its 'collapsing' effects. But of course, war profiteers made out like the bandits they always are, no matter the costs to others.

Then for 'traumatic transformation' we have the current influences of the December 26, 2019 Solar Eclipse @4Cap06 in the 3 South Saros Series which is the one we're mired in at the moment with its effects lasting at least until (two weeks before) the next solar eclipse at Summer Solstice 2020.

So this is my fuss for this evening: that a re-consideration of The Tower Solar Eclipse of 2018 in light of current collapsing conditions seems appropriate to me, if not to you, so I'm adding the above link to my previous post in case a reader wishes to check out the August 11, 2018 Horoscope.

As for financial implications of collapse, it seems to be a given. For the initial manifestation of a 2 New North Solar Eclipse perfected on June 17, 1928 @26Gem21 with money planet Jupiter @2Tau42--a degree and planet that wild card Uranus has bumped into off and on of late which suggests a period of potentials such as: careening down an unexpected path, independent education or studying in isolation, and lifestyles and/or political affiliations being emphasized and which may be under re-consideration. Perhaps at the voting booth?

Image above: The Tower #16 card from The Enchanted Tarot a personal favorite. jc