July 5, 2020: Below you see the Horoscope of America's current Jupiter Return which timed the beginning of a 12-year cycle of Jupiterian activities and conditions. Perfecting on July 22, 2013, the 2013 Return is in effect until the next US Jupiter Return on July 5, 2025. Please enlarge the image if you wish to read my study notes and yes, I totally agree with you that too many notes are squished upon the chart: 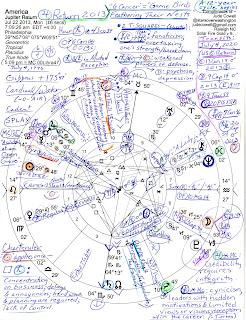 Hopefully you can see that around the outside of the chart (highlighted in lavender-pink) are the planets of July 4, 2020 (US Solar Return 2020) with 2020 Moon (9Cap14) conjunct 2013 Pluto in the 5th house of Gambling and Risk-Taking. US Jupiter is in Return 11th house (green) and rules 5th and 8th houses (Corporatism, Credit, Debt, Insurance, Shared Resources, Transformation, the Occult, Death). Wounded/Wounding Chiron therein is at '14Pisces' = "A Lady in Fox Fur" which for me, at the very least, refers to Fox TV, its Trumpian propaganda, and their 'chirons' across the bottom of our screens.

Meanwhile, with Leo rising, chart-ruler Sun applies only once: square restrictive legal planet Saturn (conjunct IC) suggesting those who concentrate on business, delays and annoyances, hard work and planning are required, and/or a potential for a lack of control (see lower left). This square in 2013 - still in effect in 2020 - is a natal echo for America since the same square appears in our founding horoscope (July 4, 1776) which makes the 2013 square more difficult to navigate as time progresses - at least more difficult without a keen awareness of the energies involved and how they can be better directed through maturity, a sense of duty, and careful planning.

Now as you know, Saturn is one of the karmic planets and the presence of the North Node nearby adds more karmic indications (in big-business-oriented Scorpio) about our country's future direction. According to R. Ebertin, the Saturn-NN duo relates to partnership difficulties and disadvantages, connections with older authorities, lawmakers, and lawyers, and/or teamwork which becomes steadily more difficult - Sun Square Saturn (ex: trying to get along or work with cantankerous old man Trump?). Again: maturity, a sense of duty, and careful planning are demanded for best results but tragically most Americans in 2020 realize that certain US government officials have turned their backs on such measured qualities and responsibilities. Therefore, America's natal Sun-Saturn square is being disrespected and neglected by Trump and associates, both foreign and domestic, as the rules, laws, and traditions favored by Saturn are disregarded and broken by scofflaw politicians, their operatives, and foreign handlers.

Now as you see, 2020 Uranus, planet of disruption, shock, chaos, separation, and perhaps innovation has crossed the Midheaven ('MC': the Why? Point) of the 2013 Jupiter Return chart (MC @4Tau50) with its tragically come-to-pass Sabian Symbol for '5Taurus' = "A Widow At An Open Grave" - well, in 2020 we now know why. (As you know, Jupiter likes to break through boundaries and as such, can relate to invaders such as viruses.) Also note that 2013 Uranus is at a critical-crisis degree in the 9th house; symbol for '13Aries' = "A Bomb Which Failed to Explode Is Safely Concealed." Naturally, this word picture may refer to multiple situations and conditions of loss and grief, including financial ones that have a potential for raids on the US Treasury, some from abroad (9th house) and facilitated by US politicians and their enablers. Plus, some plunderings and squanderings are perpetrated by thieving US politicians such as Trump, Mnuchin, and McConnell (and others before them). Of course, you may disagree if you must but there it is.

Activist Mars @6Can00 conjoined US natal Jupiter earlier in the day (4:44:44 am edt) which suggests such possibilities as overextended credit (some to the unworthy or unqualified, some to the US government by foreign entities), an activated spirit of enterprise, increased energy and confidence, an expanded appetite for luxury, and/or ethical issues and considerations. Well, yes, ethics and morals are definite concerns of astrological Jupiter but current day "game birds" aren't interested in such concerns at all or they couldn't behave as wastrels and scoundrels as they do.

But in 2020 there's another consideration: can the current Covid-19 health crisis and its fallout be found in this 2013 horoscope? Yes, I think so. Note the 1st house Venus @29Leo55, a critical-crisis 29th degree (conjunct Trump's natal Ascendant) with royal Regulus (success if revenge is avoided). Trump has favored red states over blue with medical supplies, 'nuff said about his love of revenge. Look next to Regulus for two 2013 midpoints: Mars-Saturn (harmful energy; brutality) and Jupiter-Saturn (the societal planets; politicians, government officials; the pair soon to meet in Great Conjunction at Winter Solstice 2020). These two midpoints are opposed by 2013 Neptune Rx, planet of contagion, so we have pictures of 'epidemic, grave loss, damage through major force (ex: war); pessimism', and/or 'begrudging the good fortune of others' (Ebertin). Relocate this Return chart to Washington DC and Neptune Rx @4Pis51 is in the 8th house of Death, and pollinating Mercury (conjunct US natal Sun 13Can19) that contracts whatever it touches backs into the 12th house of Politics, Large Institutions like Hospitals and Congress, Back Door Deals, Secret Activities, Karma, Self-Undoing, and the Unconscious.

Now this chart may be compared to future transits and progressions but the final chart factor I'll mention today is US Jupiter Return 2013's Prenatal Solar Eclipse ('PE') in the 15 South Saros Series @19Tau31 (here in 10th house, highlighted in orange) with 15 South's themes of 'release of tension; a lingering situation suddenly clears with a sense of collective grief or loss' (Brady's Predictive Astrology).

Now if you're tempted to think that 15 South themes of 2013 have petered out by 2020, I ask you to consider that if the horoscope of our current Jupiter Return, timing a 12-year cycle that began in 2013 'lasts' until July 2025, then its 15 South PE remains influential and in part describes our current societal conditions of 2020 all too well.

Note: America's Jupiter Return Horoscope 2013, above, is based on our July 4, 1776 chart set for 5:09 pm LMT Philadelphia, PA with ASC 12Sag08 - Jupiter = chart-ruler in 7th house and is ruler of Pisces intercepted in 3rd house - MC 00Lib47, a Cardinal World Point of Manifestation, Fortune, Fame, and Recognition.