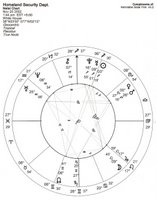 Considering the natal chart for the governmental increase we call, "Homeland Security"...from the cabbage patch of terror and control it has been sprung upon us.

With Pisces, sign of idealism, confusion, and possibly deception, arising, what may the nation expect from this entity?

Let's take a quick look and see what we can see...

The Sun/Moon combo is Sag/Leo, a very grandiose blend with a tendency to grab the limelight from others to hide its insecurity (that's INsecurity). You may remember that President Bush was against creating such an agency before he was for it--yet when Joseph Lieberman's legislation was nearing passage, Bush swiped the ball and ran with it--and Voila! We have HoSec, as I so fondly call it.

The word picture* for Sun Sag/Moon Leo: "At an emotionally moving ceremony, the shaman of the gypsies is given an honorary degree in herbal lore and ancient geography." Hmm-m-m...wonder who the shaman could be? Guesses, anyone? How about head honcho #1, Tom Ridge, who was marginalized in what might be described as an "honorary" position, si?)

With its birthday imminent--Nov 25--and a triple Mercury Return (due to retrogradation) in process, it's a big month or so for HoSec, and should be quite eventful.

The three dates for Mercury's Return to 9Sag51 are: Nov 10, Nov 17, and Dec 20 upcoming. This degree is conjunct the Fixed Star, Antares, keywords: "success which can be obsessive." Antares is seldom benign, and is most often connected with Mars, war, violence, and terror. Appropriate considering the trumpeting of terror and fear which HoSec stirs up whenever it deems necessary...although the "threat alert mauve/magenta/puce", etc, seems to have been discontinued due to excessive ridicule.


The Sabian Symbol for Mercury's "10Sag": "A golden-haired goddess of opportunity" =
REWARD: positive: an irresistible confidence in self and a tireless outreaching to all the wonders of an everday world.

Neg: consistent diversion of effort to worthless ends. (Oh dear...this one is proving alarmingly true. Waste and fraud, anyone? Boondoggle to boot?)

Since a triple Mercury Return usually brings much review, reconsideration, often a re-expression of information, or perhaps some paperwork deja-vu, it'll be interesting to see what communiques issue from HoSec (aka, DHS) around Dec 20, 2005 and onward into 2006.

The natal lunar phase of HoSec is Disseminating so the spreading and sharing of information is its basic nature. This also would refer, of course, to the catapulting of propaganda, which seems to be a favorite past time of our big fat government, as you've surely noticed...and the president says it's his "job."

And so at the basis/foundation of the natal chart is Saturn of control and authority fame. Perhaps it is the Geminian Saturn who is the shaman referenced above--Saturn at the foundation of the formation of Homeland Security, with control and the use/misuse of authority at its base. Perhaps Saturn is the One Who's Really in Charge--and Tom Ridge is long gone!)

Geminian issues concern thinking and communication, as we know, and it is also a dual sign of the light twin and of the dark. Wherever we find Gemini, we may also find duplicity, plus Gemini loves to bring the news. Archetypally it's supposed to be the Good News, but somehow that's not what we seem to hear from HoSec, is it?

Whether Saturn's transformation will end for good or ill we can not yet know for sure, but, as usual, I am wishing the best for our nation, no matter what plots may be hatched for or against us as we go forward...for go forward we surely must.


*from Sun Sign/Moon Sign, by Charles and Suzi Harvey
Posted by Jude Cowell at 2:20 AM 2 comments: Links to this post

Here I'm using the Oct 24, 1993 Uranus/Neptune conjunction at 18Cap33 to mark the official beginning of the New World Order regime...although they conjuncted 3 times altogether, but we'll consider that later on. I chose this particular date due to the Sun's degree/Symbolism--because it's esp applicable to the direction of things these days..hindsight being you-know-what.)

The Sabian Symbol for "18Cap" is: "The Union Jack flag flies from a British warship".

Pos: the self's ever-widening spread of interest in its insatiable desire to leave some permanent imprint on everything it touches.

Neg/shadow side: smug or strong-armed paternalism. (Pos/Neg from *MEJ, the rest from **DR.)

Keynote: The protection afforded to individuals and groups by powerful institutions in charge of maintaining order.

POLITICAL POWER: Power is required to maintain social order and relatively peaceful interpersonal as well as international relationships. Alas, this power can easily be misused under the pretext of preserving "law and order." (aka "war on terror"--jc)

Justice and compassion must balance social power, and especially the power of privileged groups. Where this Symbol appears, the need for protection may be in evidence--or it may be a warning against using power for selfish advantage.

And who of a privileged group can resist the temptation to abuse power? If you find one, let me know. Please. And do you think the attacks of 9/11/01 are a "pretext", by any chance? War of terror, more like.

Oct 24th was a big day actually--President Bush announced Ben Bernanke as new Fed Chairman (see Oct 24 post below) and it was the same day of NWO's Mercury Return, Mercury being the planet of communications, announcements, etc. Looks like the NWO was rising with the Bernanke announcement.

Using Mercury's degree: "22Sco": "Hunters starting out for ducks". The shadow side? "A callous exploitation of all life".

The instructive shadow side of this degee? "Witless dissipation of every resource of self and society". ("Spilled perfume"? Then perhaps it should be called the New World 'Odor').

And of interest is its recent Jupiter Return degree, 26Lib25.

Using the Sabian Symbol for "27Lib" for this one, because it seems to apply more closely:

Shadow side: Complete inability to get down into immediate realities.

Facing reality has become something of a problem, hasn't it? Ignoring or perverting reality is pretty popular, too.

There will be more observations posted concerning the NWO as time careens on...

...we'll look at the upcoming Saturn opposite Saturn, and other enlightening things about an "elite" crowd of folk who insinuate themselves into every corner of our lives whether we like it or not.

NWO Chart dates from "Horoscope for the New Millenium" by E. Alan Meece...
this is a very useful book esp for world events--see my review of it on Amazon.com, in spite of the fact that it forecasted Al Gore to win in 2000...he did win after all.


tag:New World Order
Posted by Jude Cowell at 2:11 AM No comments: Links to this post