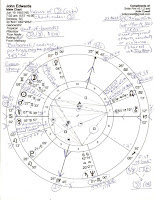 Out-of-bounds (oobs) planets accept no limits and may indicate boundless success and creativity--in the case of John Edwards, Mercury's territories of communications, oration, intellectual pursuits, and commerce seem to have benefited him greatly when he was trying medical malpractice suits and making millions.

You see in his natal chart that Mercury had just risen as he was being born, yet the Moon is chart-ruler (ASC 12Can01--conjunct US n Sun = the leader in a national chart. He has already expressed this connection, of course, in the Senate and in running for president 2004.)

Moon is in Gemini near Jupiter and all in all there are many factors showing money-making ability, and links to medical issues (including wounded Chiron in 7th house of marriage partner and legal affairs (lawsuits.) And Edwards isn't the only Washington politician with a Moon-Jupiter conjunction...expansive emotional desires used in public relations...Dubya is one such...the glass is supposedly always half-full.)

pos: an effective and overall effectiveness even in the worst of situations;

neg/shadow side: a willingness to dodge every responsibility and betray the very core of self. (This "Bankruptcy" degree refers to court cases and to "enter(ing) new paths of opportunity) (The Sabian Symbols in Astrology, Jones.)

Mercury in 12th house is very creative--as is the sign of Cancer, which is also connected to business and commerce) yet a 12th house Mercury, says Tracy Marks in her marvelous book, Your Secret Self, gives a constantly active mind, always seeking to organize vast amounts of stimulation and information; plus, a tendency toward nervousness.

Frequently there are negative messages from childhood which must be overcome--"don't be stupid" or "be quiet", etc. Then much can be achieved. 12th house Mercuries study many in-depth subjects behind the scenes--more than anyone knows.

In Washington, Sen Edwards was known to be a fast-talker, fast-walker, with little regard for protocol--Mercury in 12th house seldom develops an ability for small talk and makes compulsive lists of details for organizing and planning life.

An undervalued or overvalued intellect may result from having a 12th house Mercury and refuge may be sought in their intellectual capacities. Yet the Scarecrow's "If only I had a brain" mantra may sometimes prevail, esp during school days.

As you know, Edwards was first in his family to attend and graduate from college--AQ on 9th cusp of higher learning would've wanted that bwo Saturn's influence in 9th house. And Uranus' higher vibrations (AQ) would have wanted progress bwo higher education.

Basically this is a non-verbal thinker who perceives the world in terms of images, feelings, and sensations. His active Moon in combination with Mercury supports this, for Moon-Mercury is intuitive and thinks with the feelings (Tyl.) Moon is oobs, along with Mars and Mercury--and Edwards was born during a Moon hour--good for public dealings and publicity--an extraordinary amount of it thanks in part to an oobs Moon.

Although Gemini is the sign of a social butterfly, Moon-Mercury folks are usually very involved with their families. In fact, Edwards' Moon and Mercury are in mutual reception with one another, describing his family's strong support of his ideas and plans.

Mercury's only aspect is 'minor'...a semi-square with powerful Pluto. Semi-squares are in the octile family (8) and are weak but difficult; a separating semi-square = the release of self through creative interchange (The Astrology of Relationship, Michael R. Myer.) They show a tendency toward dynamic connections with others which manifest in either an exciting and constructive way or in a conflicting and difficult way.

And the combo of Mercury-Pluto = communicating or demanding new perspectives; persuasion ability (which attorneys need for success), and propaganda promotion--admittedly helpful in the political realm.

It may as well be for we sure are stuck with a gracious helping of it from every direction.

Mercury rules natal 4th (Virgo) and 12th (Gemini); Saturn is square Uranus--the two old vs new , tradition vs progress planets will be in opposition for the 2008 election and for Inauguration 2009. This re-contact may support his win along with this:

And while this one factor may not be enough to propel Edwards into the Oval Office, I've not found any other candidate with such an exact, or perhaps I should say, obvious--connection with Jupiter 2009, in 10th house of the Inauguration chart. Perhaps I will but haven't *as of yet.

Yet Jupiter = Republican...though jolly Jupe is also the rich man (Edwards or Romney or---Bloomberg!), judge, preacher (Huckabee? don't even joke--more Bushesque Armageddon there; besides, church + state is unconstitutional), professor, guru...and attorney--which again could be...John Edwards and his out-of-bounds Mercury as prez or VP!


general notes on Mercury and the natal Mercury of Barack Obama here.
Posted by Jude Cowell at 7:58 PM