Today I've been moseying around the internet picking a small bouquet of articles for you, dear reader, and you simply cannot go wrong with Julie Demboski's take on the current Virgoan energies now shared between lovers Venus and Mars.

Mars now quincunxes (inconjuncts; 150 degrees) nebulous Neptune and shaman Chiron so check out what Julie has to say about this week's Virgoan sassiness with her usual clear-eyed, clearly explained planetary info.

Then Donna Cunningham points us all to the August-September issue of The Mountain Astrologer Magazine where we'll find her brilliant article on quincunxes, the square-peg-in-a-round-hole aspect that figures prominently in Finger of God patterns (YODs) when two quincunxes point to a third planet; the two planets in sextile (60 degrees) make a base which results in a shape that favors a squooshed triangle, third planet/s at its apex.

In Astrology, YODs denote a special task or purpose, a crisis, and/or turning point and in natal charts may indicate a purpose, lesson, or undealt-with condition passed down through the generations. It's time to deal in your lifetime with the issues shown by the involved planetary energies if you have a YOD in your chart. And when a YOD pattern forms by progression, it can be like an alarm clock going off saying, Get Busy. Outer planet involvement shows a larger condition which may need your input on behalf of the collective.

Yes, the quincunx is a major, not a minor aspect!

In fact, Mars quincunx Neptune gives an over-anxious, impatient quality to their hook-up and indicates failure of efforts even though one attempts to assert oneself positively. Postpone any hastily made plans when Mars inconjuncts Neptune (whose foggy, nebulous energies tend to gum up or confuse matters quite regularly on its own!)

Relationships can make huge demands on us under a Mars-Neptune quincunx so exploitation is a potential; we find it difficult to see through other people's insincerity. Machinery failures are common, and we're also vulnerable to infections so do what Mama said: wash those hands and cover your mouth when you cough or sneeze please. Even psychosomatic conditions may act up or sabotage us under this influence (which Neptune tends to have a hand in even without Mars coming along.)

And anyone considering doing something shady under Mars quincunx Neptune should be prepared for loads of guilty feelings welling up inside (or even better - reconsider and don't do it!)

Well, those are the good stuff I've found so far in my ramblings today. If you've found, know of, or have written an Astrology article of interest to the collective, do feel free to leave a Comment including its link here for others to follow.

Now for the sakes of Venus, Mars, and magical Neptune, here's Faye's Magic Lamp, one of my Vesta-esque drawings from Cosmic Persona Designs, a collection of fanciful figure studies for the 17+ among us. 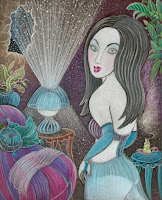