UPDATE 4.6.11 6:07 pm edt: NPR just reported that if there is a government shutdown at the end of the week it would happen at "12:01 am Saturday morning." This is one minute one second later than what I used to set up the horoscope below yet the charts' (cusps') time link remains the same.

As the US government's budget impasse continues, with raising the debt ceiling soon on our national menu as well, I'm feeling as if the American people and our tattered social fabric are being held hostage to Washington's ideology-driven Capitol Hill Theater antics as the ruling class pushes its 'higher agenda' of world domination upon US taxpayers' tab.

Therefore, the US war budget, a bottomless pit of financial irresponsibility which funds wars on behalf of global war profiteers, will not be put upon the chopping block - but your Aunt Granny Fanny's Medicare probably will. 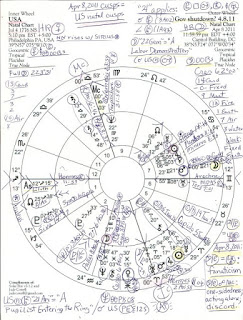 One thing that immediately pops out to the eye is that the transiting cusps are the same as our nation's natal cusps! This makes it easy to see which houses (life departments) contain transiting planets at midnight of April 8, 2011 when the national budget effectively ends.

Missing in action (besides common sense) may be anger management with the tr Moon 21Gem00 conjoining US natal Mars 21Gem23 in 7th house. Moon/Mars contacts indicate anger, intense emotions, impulsive actions, and emotional excitement and with the Moon in a mundane chart signifying The People, one may assume that most if not all Americans will be po'd big time at Congress even more than usual if a shutdown occurs.

The Moon Hour is good for fluctuations and changes though the April 8th Moon is out-of-bounds (OOBs) and thus feeling insecure and perhaps inferior concerning our needs (Moon) - as if the Political Theater now being played out in Washington is more important to DC politicians than our needs are. (Well, to me it's a given that DC pols think this, but maybe some of us still believe that sending reps there to "do the people's business" remains The Deal.)

Tr Pluto 7Cap30 is in 1st house showing massive transformation and as-yet unknowable power issues which are being revealed as Pluto plows through America's house of Identity and opposes US n planets in Cancer. When it comes to money - what the shutdown is purportedly about - Pluto (the dragon guarding the riches) opposing our national Sun/Jupiter midpoint is doing just fine, thanks...

But most of us? Not so much.

Another contact between the charts is tr Mercury 20Ari06 Rx playing about our natal Chiron. The Mercury/Chiron duo indicates a superlative ability to suss out what's really going on and to instinctively understand what others are thinking in relation to the situation. This contact describes a negotiator, teacher, counselor, orator, trader, or reporter, (or blogger?) and may signify President Obama since House Majority Leader John Boehner said this week that the President has been out of the mix on budget issues - yet '21Ari' = "A Pugilist Entering the Ring." We'll see if anyone else is better described as a "pugilist" in this matter though Republican Paul Ryan of Wisconsin is a very likely candidate, isn't he?

And since US n Chiron conjoins our natal Sun/Pluto midpoint, a picture forms...

In 10th house of Career and Public Status, there's lesson-bringer Saturn 13Lib29 in the midst of our nation's Saturn Return with the last of three conjunctions exact on August 28, 2011. (Note: in the outer chart, I neglected to add 'Rx' to Saturn 13Lib29.) Current budget battles and the debt limit issue are part of our Saturn Return for if the US doesn't raise the debt ceiling, we will be forced to reneg on our debts and promises rather than take responsibilities as seriously as Saturn demands.

(Then natal Saturn-in-10th-house's 'fall from grace' implication will follow. Will the GOP sacrifice America for the sake of - they hope - winning the White House in 2012 by refusing to raise the US debt limit?)

Rebellious Uranus 1Ari36, planet of sudden events, is just within US natal 4th house of Home, Homeland, and Domestic Scene and we feel The Awakener's disruptive influence on the monetary stand-offs in Washington. At 5Ari25, warring Mars has made his quarreling self 'at home' and Jupiter 17Lib04 has recently (March 30) opposed US natal Saturn 14Lib48, a time when rules, regulations, and restrictions are in direct conflict with the freedom to do as one wishes and success is blocked. However, Jupiter makes no more oppositions to our Saturn for another 12 years.

Meanwhile, Jupiter, significator of the Republican Party and chart-ruler (of both charts), applies to conjunction with tr Mercury Rx, a combo of grand plans, good ideas, and sound common sense. The Mercury/Jupiter duo represents businessmen, orators, and scientists.

A minor irritation is described by Jupiter's applying semi-square to Neptune: reality and the facts take a brief holiday and victimization may occur; we should avoid those who tout 'the big picture' which, to me, includes global government promoters and 'free' traders the world over...but especially those in Washington.

Neptune 00Pis08 Still in Range of US natal Moon

Neptune to US n Moon: sense of rootlessness, homelessness and foreclosures, water disasters, and fraud to the people. Yes, Neptune will eventually be beyond influencing our Moon though the planet's dissolving conditions will linger a while. But what will linger longer is radiation crossing the ocean from the Japan Nuclear Meltdown with Neptune now in her favorite sign, Pisces (oceans, fish, poisons, gases, contagions.)

You'll remember the 12S last July which I held out to bring improvement in the BP-Gulf Oil Blowout disaster and 4 days after the Solar Eclipse occurred, the well was successfully capped. And the news from Japan this very morning is that the radiation leak stopped at "around 5:38 am", as reported by Democracy Now!...success? ;p

So will our national PE's influence help with current budget battles? Hopefully so especially with tr NN (destiny; future direction) in 1st house of this chart (a good portent) and conjoining Fixed Star Aculeus, keywords: enduring attacks but success.

For our children's sakes, may it be so.

Astro-Note: though I'm not fond of spending time studying and posting horoscopes for events which may not come to pass, it seems instructive to consider the midnight chart of April 8, 2011 since a government shutdown will affect us all in a myriad of ways. Some of those ways are mentioned above, many are not. Now if only congressmembers' paychecks stopped being direct-deposited during a gov shutdown, the budget impasse would end very soon if it happened at all! Even so, this post describes current transits to the US natal chart, shutdown or no. jc
Posted by Jude Cowell at 9:36 AM