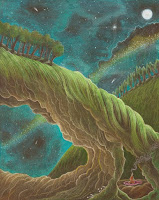 Having returned today from a weekend visit in the Atlanta area, I find that one of our best and most prolific astrologers, Julie Demboski, has covered this Wednesday's Lunar Eclipse (June 15, 2011) @ 24Sag23 which places the opposite point ('Illumination Point'), the Sun @ 24Gem23. You'll discover Julie's article link provided, below.


A Full Moon Spoon in June?

Full Moons, whether Lunar Eclipses or not, indicate a focus on relationship and partnerships issues, awareness, and/or revelations with the stronger Lunar Eclipses bringing to light what's been hidden in the unconscious or previously undisclosed by others. They also indicate fulfillment of something begun at the previous New Moon, and since the last lunation was the Solar Eclipse of June 1, 2011 in Gemini, the 6.15.11 Lunar Eclipse carries within its energies some level of importance for the collective. This eclipse of the Moon is snugly sandwiched between two Solar Eclipses, a rather rare celestial event!

As you know, the sign of Sagittarius is ruled by abundant Jupiter, so financial disclosures may be a 'wild card' target for Luna's brightening influences in June. Alternately, brewing scandals may erupt so keep your ears to the ground and your eyes on YouTube.

Plus, the recent announcement that the Pentagon Papers will now be fully revealed may be part of the disclosure scenario of June 2011 as they'll soon be published unredacted (including online) and will go back to the 1940s and up until 1967. After all these years, we may yet find out what the 'big deal' was really about when the information was leaked by whistle blower Daniel Ellsberg and the New York Times published it.

Such a political hullabaloo was created, suitable for massive diversion from the business which should have been taken care of in Washington DC, circa 1971!

Well, today is the 40th anniversary of the NYT beginning to publish (June 13, 1971) the leaked info so you may wish to snag yourself a read of an interview concerning the Pentagon Papers on Daniel Ellsberg's website where you can read the 1971 headlines for yourself.

So Wednesday's Lunar Eclipse Sun will highlight US natal Mars @ '22Gem' the day prior to the eclipse (6.14.11), a 'transit' to US n Mars which indicates taking action on plans that have been in discussion or on the drawing board for a while. Being too pushy, hot-headed, or impulsive are distinct possibilities but should be discouraged at this time. Plus, injuries to head or face, fevers, cuts, or bruises may come someone's way, especially if they're acting too brash or careless.

The eclipse triggers as well the natal square between US n Mars and n Neptune, one of the weakest areas in America's national psyche with its confused or deceptive motivations and actions vibe. 'Massive army' may also be a description of a Mars/Neptune contact, and that, we got plenty of. Too much in fact, for our 'global police force' role groweth old, unwieldy, and unsustainable.

Therefore, with the Lunar Eclipse Sun squaring US n Neptune on Wednesday, the US government, the president, and we-the-people are 'on our own' in a sense. Those in charge are elusive and/or deceptive so trusting them is a fool's game (as usual, yes, but this condition is highlighted by the June 15th eclipse - we may find out where we erred in doing so.) Someone will be intentionally misleading and clear thinking is quite impossible for we may be overly transfixed by the lustrous Full Moon's revealed secrets!

Traveling over water may be risky, too, and perhaps we should stick to creative or spiritual pursuits since hard facts may be impossible to determine or to confirm. (Perhaps what is allegedly revealed is a pack of lies!)

Having the eclipsed Moon opposite US n Mars may denote that the public (Moon) opposes the actions (Mars) being taken for they may not be popular or coordinate with current social trends or opinions. In any case, revelations of all sorts may occur on several levels this week and for the next few weeks - at least until the Solar Eclipse of July 1, 2011 @ 9Can12, which begins a brand new Saros Series, but the Lunar Eclipse's contact with our nation's natal Mars/Neptune square may give us less understanding rather than more...or, we may receive an incorrect picture or concept.

(See this blog's sidebar or underneath posts for links to Solar Eclipse columns.)

Now that's my Mundane Astrology take on June 15th's Lunar Eclipse which manifests in America's natal horoscope (Sibly version = July 4, 1776 5:10 pm LMT Philadelphia, PA; ASC '13Sag') in the 1st house of Self which personalizes it for the Washington political establishment while collectivizing it for us all. Check other versions of the US natal chart to see where this energy of revelation and disclosure occurs.

So What Does the Lunar Eclipse in Sagittarius Mean for Me?

Glad you asked! First, note the 24Sag23/24Gem23 degree area in your natal and progressed charts for clues as to where hidden info or unconscious content may be revealed or realized in your life at this juncture, and read up on any aspects the Lunar Eclipse makes to your planets and angles, if any; other current planetary contacts and their rulerships will play in to the eclipse energies as well.

Then you'll find that Julie Demboski's The Power of Nature details a more personal level of interaction from this Lunar Eclipse in the sign of The Seeker than is ever mentioned here on SO'W with its Political Astrology focus, so my very best advice is to check out Julie's column, if you haven't already!

Mossy image revealed above: Full Moon at Green Arch from my Secret Moon Art gallery of cosmic and botanical drawings...drop on by for an Art Browse when it suits. jc
Posted by Jude Cowell at 1:15 PM

Thanks very much for the mention. Will be linking to your excellent 'Luna, NM' column--my readers should love it! You supply the 'Big Picture' I so sorely lack.