Today my online time is brief (gotta motor!) but I have managed a bit of reading and was surprised to find an interesting blog concerning The Equal Party suggesting ideas for how We The People can return control of the US government to the of-by-for crowd, United States citizens.

Of course, this presumes that we had any control to lose. With every US election fixed, manipulated, rigged, or plum stolen, it's difficult to be certain especially when you consider the so-called 'Manifest Destiny' issue and America being founded by and as a New Atlantis corporation. Perhaps that's where the early 'of-by-for' came in and America was never, as we now suspect, meant for We The People at all.

The Equal Party site's Reminders from Mullins: the Rape of Justice and the World Order contains a quote from Eustace Mullins' The World Order which you may think useful for understanding what's going on socially and in Politics, that 'organized system of hatreds', as Henry B. Adams aptly described it..."No matter its professions", that's what its practice basically is.

A quick search for Mullin's The World Order on Amazon yielded no results but I did locate another of his books A Study of the Federal Reserve and Its Secrets (2010) and here is an excerpt:

"If Congress actually had retained its sovereignty and refused to let Woodrow Wilson and Carter Glass hand over the sovereign right of coinage and the issue of our money to private bankers in 1913, the American people today would not stand on the brink of slavery. The Federal Reserve System has been the death of our Constitution, and the end of our liberties. The Federal Reserve Board of Governors, chosen by and working for the powerful international bankers, have inflicted catastrophe after catastrophe upon our people." - Eustace Clarence Mullins

So who was Carter Glass (Jan 4, 1858 - May 28, 1946)? He was a busy political bee on Capitol Hill including acting as President Wilson's Secretary of the Treasury, and was instrumental in the passage of the Glass-Owen Act of 1913 which created the Federal Reserve System. And in 1933, lent his name and efforts to the Glass-Steagall Act which separated commercial from investment banking, and set up the FDIC.

Click his name to read a Wiki page where Carter Glass's firm belief in the disenfranchisement of African-American voters (!!) splays out for all to see.

And what is the astrological signature of disenfranchisement? The main one I use (though other planetary combos such as big banker Jupiter/Pluto certainly play in to the power elite's oppressive activities) is the duo of Pluto/Chiron with Chiron adding The Wounding factor to the anti-social mix.

The Great Conjunction of Pluto and Chiron (@ '12Sag') on December 31, 1999 began a new, refreshed cycle of disenfranchisement and heralded the increased oppression which the world has experienced in the New Millennium in tandem with the King of Alarm (or Terror, including financial) Solar Eclipse of August 11, 1999, the eclipse that Nostradamus warned about centuries ago and which spotlights the Oxen Point, the Lion Point, the Eagle Point, and the Angel Point from Biblical prophecy at mid-degrees of the Fixed Signs.

And on that heavy note, real-world appointments in the city are calling my name...but here's one of the varmints now in a portrait taken in December 1912 of Woodrow Wilson: 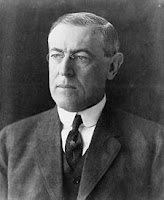 For further reading on US presidents and their initiations and secret affiliations try this. Wilson's mentor, the Utopian Colonel House, has a very interesting entry there, among others.
Posted by Jude Cowell at 8:59 AM