Congress blocking FDA approval for transgenic fish (if only US lawmakers would stand firm against all 'Frankenfood', right?), the life and legacy of creative (Neptune) scientist (Saturn) George Washington Carver, space weather and a brand new cycle of sunspot activity, climate change creating more intense weather, and the science of wildfires.

Then it's new FDA regulations on sunscreen products, Henry David Thoreau's lessons for living a 'deliberate life', and more.

Also featured on today's LOE is an interview concerning the Mayan Calendar and (alleged) prophecy about the world 'ending' on either December 21, 2012 or December 23, 2012. Will Earth and Planet X collide for Winter Solstice 2012? Or will Earth simply putter to a stop? (My basic view is that only God will end this incarnation of planet Earth. However, difficult days and Earth Shifts are ahead. You may disagree as you wish!)

LOE: "The Mayan Long Count Calendar is nearing the end of its 5,125 year cycle. New age prophecies, based on the ancient calendar, warn the world will end when the cycle concludes in December 2012."

If that's the case, then perhaps you'll want to read, listen, or download the rest of Predicting the End of the World for a more reasoned voice on the topic than is usually shared online. Even the mainstream media promotes the Mayan Calendar obsession which is certainly a good reason to stay cool about it given its high propaganda value to our current fearmongers.

Some say that rumors of a 2012 doomsday are being spread so that people can make money which sounds plausible to me considering opportunistic human nature!

Yet a transcript of PBS's April 2008 broadcast Cracking the Maya Code is available...is it becoming more timely by the minute?

Yes, they had the good sense to keep tabs on eclipses and other planetary activities. Then if you care for a little Astrology on the matter, try a previous post on Winter Solstice 2012 which shows the horoscope (set for the White House) and gives a few pertinent details including the 2012 Solstice's YOD pattern of crisis, crossroads, and/or a special task which points to planet Jupiter.

In the chart, you'll see that Jupiter Rx makes a transit to US natal Uranus 8Gem55, a time when freedom and independence issues come to the fore with results that are unpredictable especially in relation to finances, investment, fund-raising, travel, group activities, technology, and...Astrology. 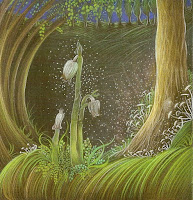