Atlanta Ga after 1996 Olympics? Few if any gains

Beware if your city or nation wants to host the Olympic Games because a pack of troubles run side by side with the expected glory and gains.

This morning NPR featured a report on the condition in which the 1996 Games left the city, people, and finances of Atlanta, Georgia. Of course Atlanta, (what for years I've called my home state's "cesspool of fires, murders, rapes, and sinkholes"--Scarlett O'Hara notwithstanding) really needed the clean-up made necessary by the whole world coming to 'sit a spell' with us on the front porch and all, but 15 years later, the after effects are quite a different story from what we were initially spun.

And of course, a sorry claim to fame: two people were killed and one-hundred-eleven injured in the bombing of Centennial Olympic Park on July 27, 1996 with Atlanta police and FBI arresting and holding the wrong man in a brazen attempt to keep scores of Atlanta's global visitors from leaving the Games en masse (though some understandably did, if memory serves.)

In which Solar Eclipse Series did the 1996 Olympics take place?, you ask.

The 16 South Series which occurred on April 17, 1996 @ '28 Aries'; 16S contains these flavors: 'issues of wasted energy or misdirected motivation especially when dealing with groups; sudden inspiration but no real action should be taken.' (Brady's Predictive Astrology .)

Uh-oh! Wasted energy? Not exactly stellar conditions for Olympic athletes, were they? Misdirected funds did pretty well though. The next manifestation of 16S: April 29, 2014 @ '9 Taurus'.


Yet in spite of everything, my personal experiences there in Summer 1996 weren't nearly as bad after I entered one of the downtown college's Art Exhibitions and was pleased that two of my cosmic drawings were accepted for the show, one of which won a Merit Award.

So here is my own walk down memory lane of the 1996 Summer Olympic Games in Atlanta--my drawing Timeless Path, an image that, if I'm not careful, can plop me back into an Olympic Games mood when I'd much rather be following a higher path! 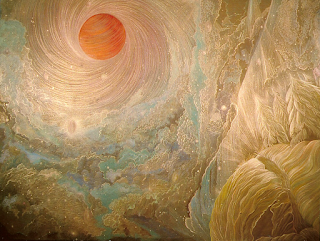 Turns out that benefits from hosting the 1996 Olympic Games weren't so timeless after all...

You know you're always invited to browse my 24/7 Art Gallery at Zazzle.com whenever you wish!
Posted by Jude Cowell at 11:29 AM