The 8th cusp-Uranus-natal IC trio with Autumn Equinox Sun conjunct 2nd cusp indicates financial matters not coming together as expected so we must concentrate on what's working rather than on new methods. Compromise remains elusive as the president (Sun) knocks heads with radical political types (Uranus in Aries = Utopians, says Ebertin) over monetary policy and reform.

The embarrassing political and ideological battles continue into Spring 2012 and beyond as President Obama's character and suitability for office come even more under fire. And the whole world is watching as radical elements attempt to destroy our entire system of government, imperfect as it may be (and it is.) Thanks a lot, Ronald "Government Is Evil" Reagan, you really got the Destroy American ball rolling and the Dark Legacy of Reaganomics keeps on giving to the rich and taking from the poor.

And of course, the Deficit Reduction Committee's work is covered in the Autumn Equinox 2011 chart with the extraordinary power of a 'Super' Congress handed to 12 congress members which to my mind is unConstitutional. Their recommendations are due on November 23, 2011 in time for the November 25, 2011 Solar Eclipse @ 2Sag37--sitting at the Foundation of the Autumn EQ 2011 horoscope!! 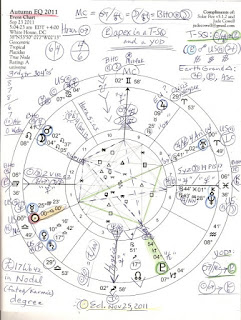 As you see, a few of President Obama's natal planets are penned in around the chart: rising is his natal Pluto in Virgo opposite natal Chiron which here sets (conj DESC--Chiron opposite Pluto = 'knight in shining armor' on a Quest); Mr. Obama's natal Moon in Gemini (publicity through speeches) is at Midheaven (MC = The Goal; Aspirations; Public Status) along with two midpoints which create angular pictures with the MC and one with Obama's natal Moon...any, all, or none may apply...

Note: on C-SPAN this morning, Charlie Rangel referred to people "putting a gun to (the president's) head."

In any horoscope, a chart-ruler's applying aspects show how things will proceed. As mentioned above, Virgo is rising, so changeable Mercury 25Vir23 in 1st house rules the chart. The applying conjunction to the Sun will perfect on September 28 at 5Lib20...'6Lib' = "The Ideals of a Man Abundantly Crystallized" which may refer to the president's new push back stance gaining momentum.

Mercury opposing Uranus (7A18) shows oration, communications, and plans embroiled in quarrels, disagreements, and disruptions, and serious conflicts arise between the generations related to finances and ideologies. This opposition may also refer to social networking (Uranus) activism as young Americans (Mercury) get out on the streets in protest.

Now manipulative Pluto, pulling strings from behind the scenes (and from abroad) is apex planet in a YOD pattern ('Finger of God', special task, crisis, turning point, crossroads.) This is a very karmic configuration and, as we know, the crisis has been a long time coming (slow moving Pluto.)

Apex Pluto in a YOD formation shows those with fixated opinions and plans that have disturbing effects upon others (not that Pluto cares about others) and past conditions must die so that a new path is revealed; this Pluto represents those with high executive positions of authority who are determined to usher in a New Order.

Perhaps I don't need to tell you this, but the people represented by this anti-social Pluto hold extreme perspectives that are out of focus with society's views and values.

A midpoint picture is created from the YOD:

Transit Pluto continues to oppose US natal Jupiter 5Can56 and denotes America's financial, political, and social struggles against powerful plutonian forces desiring to break down our nation and all civil institutions.

Yes, Pluto is very busy this Autumn as apex in a second planetary pattern--a T-Square between the Sun/Uranus opposition.

Sun/Uranus = Pluto: radical reformers (we know!!); a desire to rearrange things (without the American people's consent!); tragic experiences; imprisonment;
very provoking others with constant rebellion and distractions; disruptions of events to gain recognition; direct attacks on the individuality of others to gain more notoriety for self or interests.

As apex in a Cardinal T-Square, Pluto denotes those with intense focus on objectives and an inability to compromise with others; sharing power is a non-starter, and explosive endings may be thought necessary in order to make a new start; again, this Pluto represents high powered executives--who feel much contempt for those they manipulate, and the case of this T-Square, those whose plans they block.

Well, if you click to enlarge the horoscope you may read a few other chart details, and there are other factors of note, of course. But since I'm readying for an out of town trip, I shall close for now and await your on-topic comments and opinions which I will moderate from an area near Atlanta, GA. in this, my favorite of the seasons, Autumn.
Posted by Jude Cowell at 9:32 AM

Thank You, Theodore, your opinion is valued here! Jude