The astrodatabank page of 2012 Republican candidate Newt Gingrich gives some basic details on the life of this noted Republican whose Big Year came in 1994 when the GOP took over the House gavel and Newt was named Speaker of the House. Newt was proud to be the first Republican Speaker in 40 years but controversy soon followed the professor of history.

Perhaps you caught a recent Morning Edition feature on NPR To Imagine a Gingrich Presidency, Look To The '90s if you wish to imagine such a thing. (Audio and text. Plus, a big honkin' "Contract With America" photo from 1994 of the political thespians.)

Now when it comes to the natal horoscope of Newt Gingrich, there are at least three conflicting birth times to be found online. For more on that, his astrodatabank wiki page, above, gives you the scoop. 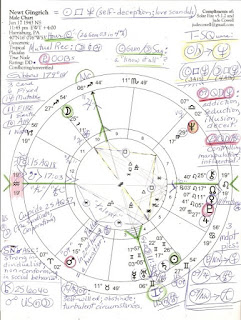 11:45 pm ewt gives an ASC of *19AQ19 which has intellectual and contrarian correspondences. This makes Saturn in Gemini the chart-ruler, with quirky yet brilliant Uranus in Gemini as co-ruler which supports his Mercury/Uranus conjunction's intellectual prowess and its radical ideas (see more on this conjunction, below.) The pair snugs near IC (Foundation; Basis) so its scintillating energies may be said to under gird him and form the basis of bis career success in the opposite house, the 10th house of Career.

10th H contains the Moon (emotional nature; mama; publicity; fluctuations) @ 25Sag11 which shows his waxing-waning with the public yet with a reigning need for public status and attention. Jupiter rules 10th H through Sagittarius @ MC and Jupiter 27Can20 is weakened by its position in Cadent 6th H (abundance through work and service) yet Jupiter applies to an opportunistic sextile (60 degr) to idealistic Neptune 29Vir17 in 7th H of Partnerships (1A58), and a conjunction with power-mongering Pluto 5Leo41, also in 6th H (8A21.)

Bank-loving Jupiter/Pluto is a signature of wealthy people who are of a move-n-shaker persuasion, always ready to start large scale projects.

Broad thinking Jupiter/Neptune has, as you know, the Grand Spirit-Grand Scheme, Speculation-Inflation-Wastrel vibes of an over-promiser. Gingrich's detail-oriented ability is supplied by thinking Mercury in its own sign of Gemini, sign of communication and oration; Mercury is in sextile aspect with Pluto as well which deepens his intellect and provides him with analytical and concentrating abilities which are also supported by energetic Mars sextile hardworking Saturn.

As you see in the horoscope, Gingrich was born when Uranus and Pluto were in sextile
(60 degr) aspect indicating scientific interests, a deep search for knowledge, and sudden inspirations.

Newt, a Man of Ideas

His Mercury/Uranus conjunction indicates an inventive mind; advanced Science topics may be of interest including atomic energy; occult leanings or Astrology may be indicated; sudden flashes of intuition inspire solutions; independent thinking is evident, self expression is dramatic, traditional ideas are never automatically accepted, and he's constantly seeking the new or unusual.

The Essence of Newt: closest applying aspect to natal Sun

Now the only applying aspect to natal Sun is a square from Neptune indicating early confusion with his identity (teen parents separated just after his birth, stepfather adopted him; grew up in a military household.) This is an aspect of a self-deceiver par excellence (US president? Really?) with an unconscious desire for importance which is tamped down a little by a strong Saturn, here in Gemini, which gives him a logical mind. Plus, Saturn and Mars are in sextile (endurance, fortitude, practicality), and Mercury's sextile to Pluto gives keen mental perceptions, powerful self-expression, and another potential for occultism.

Moon SQ Neptune shows some deception or illusion on the part of Mom who may have fibbed a little about Dad (Sun/Neptune SQ.) In adulthood, these energies show up in his multiple marriages and a reputation for romantic affairs and for leaving ill wives for someone new.

A 4th H Sun rebounds its energy by polarity into the public 10th H but also indicates that Newt shines brightest when he's chillin' at home. Yet serious Saturn in 4th H tells a tale of heavy responsibilities in the family sphere, and a struggle to achieve domestic security. Real estate, contracting, building, and/or farming are indicated.

Well, you know there are many people who say that Newt Gingrich Will Never Be President and considering his natal chart, I shall agree.

For one thing, the closest direct link to America's natal Moon (We the People; 25--28 AQ--most victorious candidates have had a strong connection to our national Moon) in his natal chart is an opposition from Chiron 25Leo40; Chiron in Leo shows his crisis on earth relates to **ego problems which were meant to be conquered at his Uranus opposition ('midlife crisis') but I suspect ego continues to rule Mr. Gingrich because he's still desperate for public attention for himself, a trait supported by his 10th H Jupiter-ruled Moon.

Well, his campaign--more PR than presidential?--does collect funds for his coffers and sells quite a lot of books. Plus, his SN conjunct ASC does not indicate popularity! (Click to enlarge chart for more on SN/ASC, bottom left.)

Now here are Gingrich's natal midpoint pictures--any, all, or none may apply and none depend upon a correct birth time except for Saturn/ASC:

Sun/Moon = Neptune (T-SQ): delusions about what can be done or how much hard work it will take to achieve it; dreaming of options open available to redirect plans; misunderstandings, illusions, deceptions, mistakes; undermining of relationships.

Mars/NN = Saturn: teamwork rendered more difficult as time goes on; little need for feedback from others.

Such is Newt, The Politician.

*You'll note that his Aquarian ASC conjoins the natal ASC of President Barack Obama but Newt's chart rulers--Saturn and Uranus--are both in Gemini and at the Foundation of his chart and psyche, if 11:45 pm is correct.

Note: 'know it all' comes from his Sun Gem/Moon Sag personality blend (Harvey.) Plus, the Dec 10, 2011 Lunar Eclipse @ 18Gem11 eclipses Gingrich's natal Saturn--a spur to his ambition? Or a depressing time when hidden problems are revealed?