The Natal Horoscope and Character of George Washington

Chuck Baldwin's Founders Without Whom America Would Not Exist gives more detail of the usual crew than if our Founding Fathers could sign up with LinkedIn but not so much that reading them interferes with your July 4th celebration! 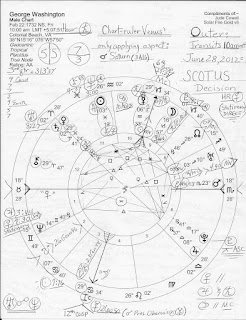 Here you see the natal horoscope of The Father of Our Country, George Washington, born February 22, 1732 NS (OS = Feb 11) Colonial Beach, Virginia at a recorded time of 10:00 am LMT (probably rounded off but who can say? Its Rodden Rating is AA so I'm going with 10:00 am.)

Hour of responsible, authoritarian Saturn; chart-ruler is Venus 29Pis24 which applies to only one major aspect: a conjunction with staid Saturn 2Ari41 showing that he took himself seriously. As you see, both planets snug around 12th cusp of Politics, Karma, and The Unconscious. Washington is known for having visions and for prizing loyalty and commitment, both traits which may be found in his Venus-Saturn-12th-cusp picture.

Plus, the archetypal "Father of Our Country" label along with the usual serious expression he affected in portraits (and in life, I've read, usually ascribed to his lifelong dental problems) may be seen in the Sabian Symbol for natal Venus @'30Pis' = "The Great Stone Face" with face relating to Venus and stone an obvious Saturn reference. Plus, as you know, Washington's visage is captured on stony Mount Rushmore.

George Washington is well-known for mystical tendencies (he was a Grand Poo-Bah of Freemasonry and may be viewed in portraits wearing his Masonic apron--he owned two apparently--here are good photos of an apron on display in the Lodge at Philadelphia--and these are in large part indicated by Sun in Pisces (as has Mitt Romney along with natal Mercury and Mars) and by Neptune in 1st house of Self. Neptune is in Gemini (the youth who served the gods) which is ruled by Mercury (the messenger of the gods) which creates a Mercury-Neptune vibe in his psyche relating to...mysticism and visions which are further encouraged by a Neptune-Pluto trine, and NN in Sagittarius, sign of The Seeker on a Quest, in the 8th H of The Occult.

In addition, warring Mars in occult-studying Scorpio, sign of the Eagle, lends more mysticism to his personality bwo Scorpio along with a strong Mars-Pluto streak. Interestingly (and perhaps you can read a notation of it if you enlarge the chart) Mars is focal planet of the Pluto/NN midpoint which gave him potential for an exhibition of personal power and/or tyranny. (Tyl.) Perhaps this brutality is best seen in General Washington's quick execution of deserters though fighting and leading in war is proof enough for me.

And yet without his ambitious Capricorn Moon, the General might never have had the reigning need to become a political leader such as a President, a rise in status which is supported by the natal chart's hemispheric emphasis on the Public sector (7/3) including n Moon in 9th H. And of course, his military career is seen in the 6th H of Military Service with the very powerful yet wide conjunction of Jupiter (The General) and Pluto (the Poo-Bah of Control) in Libra, a sign of war. This also shows the Revolution's financial support from foreign sources.

And of course you see Washington's IC (Foundation of the Matter; the HOW? Point) @'30 Cancer' = "A Daughter of the American Revolution"!

Another aid to him in war and politics was his 10th H Mercury 6AQ33 at focal point of the Saturn-Uranus midpoint which supplied him with the ability to hit back hard under provocation along with a natural talent for organization. Mercury rules 2nd H of Earning Ability and Values so Washington was no slacker in the moneymaking department of life. Inheritance is shown by SN in 2nd H and NN in 8th H.

Considering that Washington's refusal to be crowned 'king' of America is much-touted along with his walking away from the power of the presidency, it's curious to me that (if his birth time is correct or nearly so), Pluto and Ascendant are inconjunct (150 degr) denoting that he volunteered his services, was recognized as having a strong character, smoldered inside if anyone revealed his weaknesses, and had secret hopes that opportunities would present themselves to show what he could accomplish if given the authority to do so.

As we know, quite a few opportunities did...