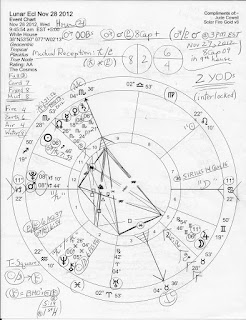 It's an Hour of Jupiter, and Mars OOBs of the Earthly plane closely conjoins powerful, wealthy, string-puller Pluto @8Cap10--this pair of force and weaponry rise in Washington D.C. and as the eclipse perfects, enters the 12th H of Politics, Karma, Self-Undoing, and Large Institutions (wounded veterans in hospitals and soldier suicides come sadly to mind.) A desire to face danger may be in evidence as well.

Moon = the Mood We're In

A Gemini Moon shows We the People are of two minds as lively attention is paid to all forms of news and communications--we are straining to hear some good news and hopefully the populations of our cities and towns affected by this week's Hurricane Sandy will have heard good news by November 28th! Yes, Moon approaching Jupiter is a happy combination and here Jupiter rules the Sun posited in expansive, broad-minded Sagittarius. Plus, this Lunar Eclipse occurs 2 degr 7 mins from America's natal Uranus @8Gem55 which may serve to increase our excitement and our restlessness.

Indicative of turning points, crossroads, and/or crises are the two interlocked YOD patterns, one with Saturn 6Sco21 and MC at apex (focal points) and a second focused YOD (aka, the 'Finger of God' = an imperative to deal with) pointing toward the Moon (the people) and opposing the Sun (leader.)

Midpoint pictures for these YOD patterns include potentials for irritability, suppressed excitability, self-willedness, desires for separation, and a striving for independence (you'd think we Americans had that one under our belts before now! yet we're under threat once again.) Also denoted are: suffering sudden damage, great energy, ambitious aims pursued, readiness for action, and/or sudden interference in the business of others (an American specialty thanks to our tiresome imperialist plutocrats who wish to rule the world--from the White House, it seems.

Additionally, there are karmic or fated implications for planets when they appear in a chart at the same degrees: Moon-Sun-Saturn (6th degr) and Mars-Pluto-Venus (8th degr.)

A very dynamic picture of tense development is shown by midpoints aimed directly at the Sun (leader) @6Sag46 in 11th H: Pluto/MC = Mars/MC = Sun = Saturn/Pluto = Mars/Saturn indicating potentials for: power to attain success, authority, a strong will, giving orders to others, overcoming resistance or obstacles, sparing no pains in work, renunciation, privation, physical separation, toil, or an inability to meet all demands due to weak vitality.

Of course, this is a Lunar Eclipse so its midpoints also affect the Moon (the public) so we may find ourselves dealing with such issues as: feminine leadership, premature action, deep emotional reactions, lack of deliberation, imposing one's will upon women, independence of women, melancholy, depression, tragedy especially relating to women, illness, and/or a lack of courage (or charges of cowardice.) Looks like the GOP's 'war on women' with its backward-facing legislative proposals will have us stirred up even more in November, as it ought if America intends to remain a 21st century, non-Talibanesque nation!

Now with serious Saturn as chart-ruler (ASC 11Cap22), we take note of the karmic Lesson-Bringer's only applying aspect, a sextile to 12th H Pluto (1A49.) A sextile between these two karmic planets denotes that a challenge is involved--to persevere without becoming obsessive and single-minded. Defending the rights of those who are being victimized is a positive trait of a Saturn-Pluto sextile, yet both Moon and Sun (people-leader/s) may be in victimized (apex) positions here--or may describe those who use the sextile to achieve positive results!

Spotlighted are organization of info and intelligence reports, plus, 'proper management' issues. Top of the to-do list for a Saturn-Pluto sextile are: self-reliance, financial independence, and total control of all decision-making; perseverance will eventually turn around vulnerabilities, disorganized enterprises, and/or plans, and will result in the release or leaking of withheld information.

And since all eclipses are universal 'wild cards' with a Uranian nature and act as catalysts that serve us by uncovering hidden secrets and scandals, perhaps we'll be amazed by what we will soon find out.

Since a Lunar Eclipse that occurs after a Solar Eclipse tells us about our reaction to the Solar Eclipse, you may wish to follow a link to my recent post on the karmic November 13, 2012 Solar Eclipse @21Sco56 which conjoins US natal 12th cusp of Politics and Secret Deals (Sibly chart 5:10 pm LMT), and also conjoins the Midheaven of Thomas Jefferson's natal chart.

Speaking of YOD patterns and Thomas Jefferson, here's a top post on SO'W which concerns the YOD in Jefferson's natal chart, if you're curious.

Now in a previous post or two I've groused astrologically about Election Day 2012's Mercury (votes, voters, ballots, polls, decisions, etc) performing a Station Retrograde (when a planet seems to stand still before turning direction and is made stronger while in Station mode.) Mercury's Station Rx occurs around 6 pm ET on November 6th and with you, dear reader, I await with baited breath to see if this Mercurial planetary condition again affects election results, both presidential and congressional--as it did in the Bush-Gore brouhaha of 2000. Especially since it Stations at '5Sag' this time which opposes President Obama's natal 3Gem21 Moon and conjoins Mitt Romney's natal South Node (SN) in Sagittarius in his n 7th house (Mitt's natal DESC = 1Sag01) and thus opposes his n NN, a Jupiterian point which has positive joining qualities.

Is Mercury's Station Rx showing American voters reviewing his record and 'turning back' to President Obama to gift him a second term as president? Does the separative Mercury-SN contact for Mr. Romney describe his ideas as old-fashioned and 'behind the times' such as rolling back Obamacare, minority rights, and women's reproductive rights? Well, Mercury-SN shows one who often has trouble gaining support for his ideas and plans (Mercury) so my hope is that the lesser of two evils--Mr. Obama, apparently--will benefit from Election Day 2012's Mercury Station Rx and that the Supreme Court doesn't get an opportunity to step in and decide the presidency on behalf of the plutocrats and neocon warmongers we so recently suffered under for eight years, a bad deal for American society which continues its negative influences to this day and beyond.

And this pertains, no matter how hard Florida's Jeb Bush tries to snow us with his glowing assessment of his disastrous brother, Dubya! Here's Jeb on Meet the Press a while back not showing the slightest sense of irony or discomfort that he even has to defend his brother!

Visit NBCNews.com for breaking news, world news, and news about the economy