Below you see the horoscope of the coup that led Hafez al-Assad to power in Syria, known as the 1970 Syrian Corrective Revolution. Here is the Wiki page of Syria's current president Bashar as-Assad, son of Hafez, and potential purveyor of chemical weapons.

Now there are other natal horoscopes for Syria (exs: 1941 and 1944) but this chart is set for Damascus on November 13, 1970 at 6:08:15 am EET, a symbolic sunrise hour for astrological purposes since Campion's The Book of World Horoscopes gives the hour of the coup as "dawn"--probably a little while after the solar chart you see here. This solar chart is also appropriate because Hafez al-Assad (1930--2000) is known of setting up a 'cult of personality', a charge that can easily be levelled against the United States of America with George Washington honored as our archetypal leader. 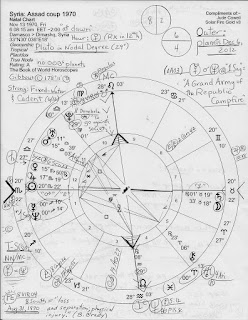 The 1970 Assad Regime was 'eclipsed' by the November 13, 2012 Solar Eclipse @21Sco56! ('Joy through commitment'--Brady.) Not certain about the 'joy' for President Assad but I'm certain the Syrian people who dissent from his violent actions are feeling unjoyful at the moment.

December 6, 2012: Today's transiting planets are penned around the outside of the chart and as you see, tr Saturn approaches natal Venus Rx @15Sco50 (the Eagle Point) and dissolving, obfuscating Neptune @00Pis32 is and has been in contact with natal NN at natal IC (Endings; The Drain); n NN is at a critical-crisis 29th degree as is MC and natal Pluto @29Vir01 in 10th house, a fateful or karmic combination.

And of course, Neptune rules gases and other toxins such as chemical weapons which are now said to be part of President Assad's plans to use against his own people. Or that's what we're being told in the West to make our government's intervention more palatable. (See the Wallace and Orwell quotes below.)

Neptune to NN has a potential for breaking down relationships and for a 'sense of being out of the group' (or, 'bound together through spiritual sharing'--Tyl) plus, with the 4th house connection to Homeland, Domestic Scene, and Security Issues, Neptune entering Syria's 4th H creates a disturbing and possible tragic picture.

In the natal horoscope of Assad's military coup, the Hour is Venusian (values, valuables, and relationships) and the 1st house Mercury-Neptune conjunction is very close at '1Sag' = "A Grand Army of the Republic Campfire"...("superficial idleness"--Jones) is descriptive as is the Ascending degree's Sabian Symbol, '21Sco'..."A Soldier Derelict in His Duty"..."DEVIATION...complete faithlessness to the common welfare"--Jones.

The 1970 Assad Coup of the Syrian government occurred during the 8 South Saros Series of Solar Eclipses which has a 'loss, separation, partings, physical injury' vibe (B. Brady) and 8S last manifested on September 22, 2006 @29Vir--conjunct the Assad Coup Pluto 29Vir01. In America the public has been set up for an eventual take-over of Syria in the last few years, and the warring drumbeat continues as Year 2012 ends.

So as always, my primary concerns are for the good people of Syria who are in the sightline of the raptor's gaze as global government is forced upon the peoples of the world.

As you see in 11th H, there is a natal Mars-Uranus conjunction indicating tendencies toward violent uprisings, use of security forces to control strife, radical military movements (ex: Assad's coup), and explosions. Nuclear and/or chemical weapons concerns also apply to this rebellious duo of attacks and hostility especially with the obvious link between unpredictable Uranus and uranium.

Well, there is much more to say about this chart and current affairs shown by the affects upon it by transiting planets but my blogging time is done for today. At least the natal chart of the Assad Coup is now posted for those who may wish to consult it. Leave on-topic comments if you wish and we'll discuss.

"The American fascist would prefer not to use violence. His method is to poison the channels of public information. With a fascist the problem is never how best to present the truth to the public but how best to use the news to deceive the public into giving the fascist and his group more money or more power."

- Henry A. Wallace, 33rd Vice President of the United States, Secretary of Agriculture, and the Secretary of Commerce 1988 - 1965

"The most effective way to destroy people is to deny and obliterate their own understanding of their history."