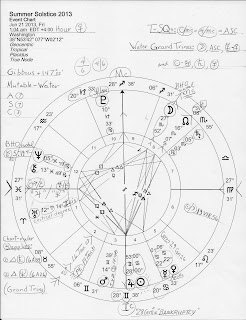 Compassion, aid, and/or propaganda (the media; the masses; surveillance) may also be indicated by this placement of Neptune.

Now as you know, Water Grand Trines have a protective imperative and all such planetary patterns indicate closed circuits of energy. Guarding against stagnation and inertia is problematic with all Grand Trines and especially so when more than one appears as here: there are two if we count the ASC with Moon, Mercury-Venus, and Sun-Jupiter, Saturn, and Neptune.) The quality of Water seeks peace, tranquility, and safety and many of us will tend to retreat into our private worlds if and when we can. Naturally domestic issues will be high on our lists of concerns as well.

Additionally, the two Grand Trines, made more complex by Jupiter still in Airy Gemini while the Sun has entered Watery Cancer, signifies America's current debilitating conditions and we have only to glance toward Capitol Hill ideologues and bigots to remember that this is what we're experiencing across the nation due to what I termed here in 2012 as "Jackassian Politics." I was surprised last evening to hear MSNBC's Chris Hayes on his program All In using the description of jackassery behavior for certain Republican-Tea Partiers. But we can't be the only ones who've noticed!

Mr. Hayes on Republicans Behaving Badly as they attempt to break the Senate:

Visit NBCNews.com for breaking news, world news, and news about the economy

Now if you listen to the full broadcast of All In, Chris also discusses the Jackassery Politics as practiced by Chicago Mayor Rahm Emanuel who is closing 50 schools in the city while using taxpayer millions to build--wait for it--a sports stadium. Jackassery abounds everywhere we look!

Rising is 27Pis31 along with two midpoints: 1. Uranus-NN denoting radical political groups and reformers; 2. the forceful Mars-Pluto midpoint which gives dangerous and ruthless tones to the chart and to the hot summer season. Also, Mars-Pluto opposes US progressed Neptune which adds potentials for disasters caused by water, oil, or gas, causing secret harm to others, and use of cunning and deceit--you know: Washington and state politicians behaving badly.

Now that 8th house Moon (We the People) @27Sco52 nears the Inaugural 2009 Moon (29Sco45) and conjoins here President Obama's natal MC (Aspirations; The Goal) which hopefully indicates his efforts to bring relief and improved conditions (such as infrastructure investments which would solve more than one problem) yet we find Jupiter @28Gem53 conjunct IC (Foundation of the Matter) and '28Gem' is a degree of BANKRUPTCY in Sabian Symbols. Can our economy hang on until America's next Jupiter Return (5Can56) on July 22, 2013? Will nation-building investments or roads and bridges finally arrive in the nick of time to create jobs and increase our safety?

Perhaps! For we know that debt, credit, shared resources, and Big Business are on top of our national agenda this summer with the Solstice North Node of Future Direction posited in Scorpio and in Watery Scorpio's natural 8th house--plus, Scorpio's Mars-Pluto influences rule the Solstice ASC in Washington, as noted above. Building bridges would be a great use of this forceful energy. More war and drone strikes? Not so much.

Well, there are many more chart factors to consider but I don't want to ruin your fun (check out that Scorpionic Saturn Rx just barely in 7th house and the critical 20Cap degree on 11th cusp!) so I'll close by detailing the midpoint pictures formed in T-Squares between Sun, Jupiter, MC, and the ASC in the Summer Solstice 2013 horoscope:

Sun-MC = ASC: personal relations or associations (Ebertin); needing to be forthright and honest about how your accomplishments and contributions can help others (Munkasey.)

Jupiter-MC = ASC: pleasant contacts that support one's personal success (Ebertin); a need to absorb life's lessons; needing to understand the motives and intentions of others; reminders that one must work with others (Munkasey.)

Yes, that last indicator is aimed toward all our anti-government jackassian politicians who know who they are.