Sun (president) plus Saturn (Congress; SCOTUS) vs The People's Moon

A fated planetary pattern called Thor's Hammer (aka, Fist of God) may be seen in the natal horoscope (July 4, 1776) of America between the Sun-Saturn square aiming toward US natal Moon @27AQ10 (We the People): 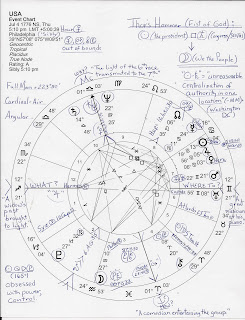 Some basic notes are scribbled thereupon so please click image to enlarge. You'll note our Midheaven, the WHY? Point (Goal) has 2 Libra: "The light of the sixth race transmuted to the seventh" for its Sabian Symbol. Keyword: THRESHOLD which negatively implies "a loss of reality in an infinitely regressive other-worldliness or a total lack of all practicality." (Jones.) Hmm! Sounds like a few current-day congressional anti-government obstructionists we both could name!

Sun square Saturn denotes our Founding Fathers getting their authority act together in our nation's earliest days, and the presidents' (Sun) methodical application of what's been learned (Saturn) as the decades have passed. This square also indicates the difficulties of the presidential job with its imperatives which must be accomplished in a patient one-step-at-a-time manner.

Unfortunately for the American people and the rest of the world's populations, this measured approach has come to include the establishment of a global government with the US acting as its military arm. President Obama's speech yesterday in when he seems to have redefined America's foreign policy with a much-needed if elusive end to war was inspiring if true, dangerous and cynical propaganda if false.

Hit by Thor's Hammer (sounds like drones strikes, doesn't it?

Of interest are the potentials for the karmic Sun-Saturn pair in Politics and Business as given by Michael Munkasey in his Midpoints: Unleashing the Power of the Planets:

Thesis: The will of the people as defined in the principle founding documents; checks and balances within enterprises as implemented by various administrations; form and definition in an enterprise.

Antithesis: unreasonable centralization of authority in one location (obviously Washington DC--jc); a leadership preoccupied with the various forms of law enforcement; older and more distanced leaders; pessimism and gloom as a center focus of policy.

And for those who use July 4, 1776 as our national founding date, what are the potentials revealed by the midpoint picture created by the Sun-Saturn-Moon pattern in America's DNA (natal horoscope)?

Understandably, it seems that our current fear of government has been within us from the start--first with the British crown. And our fear has been purposefully increased many times over by infiltrators through the last several decades who are determined that the American people give up on America because of the government's inefficiency and ineptitude!

Hope you all have a very safe Memorial Day weekend. Jude