With the myriad of things going on in the world since the dawn of the New Millennium (and not all of it as 'bright' as we were often lead to believe beforehand), the following horoscope is quite useful for those who wish to keep up with transits of planets and points to its natal positions, chart angles and other house cusps. And naturally other techniques are valuable for comparison such as progressions and Planetary Return charts based on this natal horoscope as it relates to all of humanity and to America as the 'New Atlantis' for the much-touted 'New Age'.

Hour of the Moon (fluctuations, instability) with Sun in Saturn-ruled Capricorn: 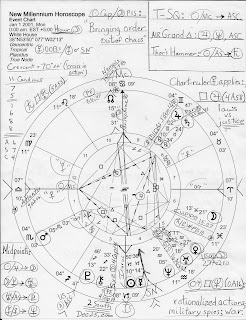 As you see, 5th house Venus is chart-ruler and makes only one applying Ptolemaic (major) aspect--a square to Jupiter @2Gem10 Rx in the 8th house of Money, Debt, Credit, Transformation, and---well, you know the Scorpionic 8th house realms that apply. Both Venus and Jupiter are associated with money: Venus with valuable items, evaluations, diplomacy, and relationships (the attraction principle), and expansive Jupiter (the relating principle) ruling banking and bankers, politicians, religious leaders, professors, gurus and priests, adventurers and explorers, thespians, and...well, you know the rest of the roles the Great Benefic can grandly play.

Venus square Jupiter = laws vs justice, something that our once exalted legal system could claim to uplift, at least some of the time for many of the people but as you know, the US justice system has been infiltrated and corrupted and is in need of purging to get out the crooks, charlatans, and anti-government types who prefer chaos in society to law and order. That is, unless it's their psychopathic kind of 'new world order'.

In fact, the New Millennium's Sun Cap-Moon Pisces blend denotes an ability for "bringing order out of chaos" yet the miscreants of power are set on creating extreme chaos first and then rushing in to 'save the day' by repairing the negative conditions they themselves engineered. Plus, Ayn Rand's cold rationality of objectivism and Darwin's 'survival of the fittest' theory are meant to weed out the chaff--the weakest--among us.

Historically it's interesting to note that the Sun Cap-Moon Pisces blend is shared by Founding Father Benjamin Franklin, perhaps America's prime mover who was very instrumental in setting up our republic ("if you can keep it," he said.) As you probably know, Ben Franklin was brethren in at least three secretive groups of his era: the Freemasons, the Rosicrucians, and the Illuminati Society of Adam Weishaupt. Much of his initiatory activities and involvement occurred while he sojourned a few years in Europe--our diplomat to France, for one example.

So there's Venus @27AQ11 conjoining US natal Moon (We the People) and Jupiter so recently separated from Great Conjunction (May 5, 2000) with austere, controlling Saturn (24Tau34 Rx) with their conjunction's notable Sabian Symbol: '23Taurus' = "A Jewelry Shop Filled with Magnificent Gems". Or at least it was. But between bubbles, busts, 9/11/01, the Great Bush Heist of 2007/2008, and inflation America's gems and jewels are now primarily clutched in certain claws and deposited in secretive offshore bank accounts rather than in the hands of the people and in the US economy.

However, at the turn of the 21st century, transit Venus to We the People's natal Moon gave most of us an emotional lift and an expectant feeling that good fortune was around the bend. And of course, corporate and government propagandists played upon those feelings to further their own best interests and keep us occupied with entertainment and trivialities (remember the 'Y2K' hustle? wonder how all those millions were really spent? for surveillance systems, I suspect.) And all while power brokers continued their 'total awareness and control' plans that crescendo upon us now.

Okay, there are many other enlightening chart factors such as planetary *patterns to discuss but I shall hush for a while and hope that those who haven't used the New Millennium Horoscope before may take it as the predictive tool that I have found it to be. And I'll keep it linked conveniently near the top of the SO'W sidebar for my own future reference (and posts), if not for yours!

*Planetary Patterns: marked by a dotted line, you see a Fist of God (or, Thor's Hammer) configuration pointing toward 8th house Saturn Rx, an Air Grand Trine if we count the Ascendant with Jupiter-trine-Neptune (the speculator-grand schemer-inflationary pair that met three times in 2009 conjunct US natal Moon and whose energies are imprinted upon the Obama presidency, both terms), and a T-Square that expresses its Sun-opposite-MC energies at Ascendant (rising.)