Saturn Direct Station, Mars-Saturn, and the Conservative War on Women

On Monday July 8, 2013, austere, restrictive, conservative Saturn in Scorpio, sign of Big Business, the occult, sex, and reproduction, stations direct in preparation for moving forward once again. With Republicans in several states already implementing stone-age laws meant to limit health care for women (along with their ridiculous battle to repeal Obamacare) and stymy abortion rights, we find a station of strength for the planet of loss and suppression feeling his oats with more sharia-type legislation to come.

Theocrats in government in the US? Well, yes, and now aligned with neocons, Social Darwinists and obstructionists of the Ayn Rand persuasion, and, considering the perverse schizophrenia of the GOP's alleged obsession with stopping abortions while simultaneously taking food from hungry children and pregnant mothers (Food Stamp cutbacks), we may feel some amount of Saturnian fear about what these power-mad utopians intend for America's future.

Sadly, in a Saturnian word, I'd say they intend to stunt our nation into accepting the 3rd-world status we're well on the way to achieving thanks to the anti-governing forces now infiltrating Washington DC and state and local governments across the land.

Check out Saturn Stations and Conservatives Dig In for more info on this and related astrological themes.

You may also wish to consider the Secondary Progressions of the US natal chart which has for some months a difficult condition for American women (Moon) with SP Mars and Saturn 'embracing' SP Moon in late Libra though the SP Moon will soon enter Scorpio.

Of course, the good news about the SP Mars-Moon-Saturn trio of illness and separation is that it describes temporary conditions for American women (and for the public--US Moon also signifies We the People) once the SP Moon moves beyond SP Saturn a degree or two. (SP Moon moves symbolically approximately one degree per month.) This is in keeping with the adage that the one thing Astrology brings to the analysis table is the element of Time--when will things begin and when will they end? And of course, the astrological Moon is an excellent timer.

But how much damage to our rights and our healthcare choices can Republicans do legislatively before late November when our SP Moon leaves the hardened influences of Mars-Saturn? We must speak up where and when we can!

Here's a partial view of America's SP horoscope set for the date (Nov 28, 2013) that SP Moon finally conjoins and crosses over SP Saturn Rx @3Sco10--as you see, SP Mars @18Lib24 in SP 2nd house of Money, Values, and Earning Ability is Rx (since 2006) and thus the warrior planet's energies are now turned inward--and upon the American people via physical violence and crime, attacks upon previous laws and institutions, police violence against peaceful protesters in order to protect corporations, injured vets returning home, rapes (and the GOP 'redefining' of the word 'rape' and of 'abortion'), increased arming of the citizenry and of the government, and more: 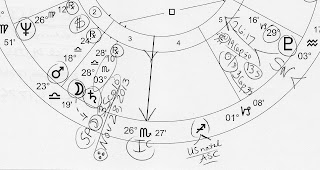 Perhaps you also see our SP Pluto @29Cap16, a critical-crisis 29th degree with Pluto one of the planets relating to health, healing, and surgery (abortion.) This Pluto out-of-bounds seems to indicate that foreign puppet masters continue to have a critical say in the proceedings of our nation, as always (Pluto was OOBs at America's founding and remains so by progression which shows evolutionary progress. 'Our' Federal Reserve Banking System serves the City of London and England's House of Rothschild. And extremely wealthy Pluto is a master of hiding great fortunes in secret places.)

Now my suspicion is that an alert personage such as yourself has already felt this restrictive, hard-nosed picture of Mars-Moon-Saturn without any help from Astrology. And you know that the Mars-Saturn duo tends to destroy vitality with its harmful and destructive energies. These days, the duo's self-willedness and endurance may be seen in North Carolina and Texas legislatures, to name but two, where all manner of tricks are used by Republicans to shove through their regressive anti-women agenda.

And yes, I'm pro-choice yet I don't believe that abortion ought to be used as birth control. Actually, politicians should never have stuck their meddling noses into what is a medical issue involving the consciences of those involved. Yet Mars-Saturn does like to force 'honor' upon others and I suppose they pretend to themselves that this is what they're doing--in spite of the fact that no one can legislate morality. Yet the GOP's and Religious Right's extreme interference in women's health issues is plainly paternalistic and was described on a basic level in early June 2012 during Lady Venus' rare transit across the (paternalistic) Sun.

Plus, the drive toward 'smug or strong-armed paternalism' has been intensifying since the Great Conjunction/s of Uranus and Neptune @18Cap (POLITICAL POWER) three times in 1993 with just that negative connotation in its Sabian Symbol (Jones.)

But now Republicans and their Democratic enablers have stepped out from the shadows and are brazenly stomping (Saturn) on the rights of American women who are determined to retain the right to make personal decisions concerning their bodies and families. More than one person has wondered aloud how male politicians and their vaunted egos would react if women decided that men's favorite little erectile disfunction pills were not to be allowed in America!

My favorite anti-abortion and anti-rape method? Men put down those pills and zip your pantaloons back up.

Curious fact about 1993: the Pre-Natal Eclipse Series for the US SP chart you see a snippet of here (13 South) manifested in real time in 1993, and again in Summer 2011 with its 'constitutional crisis; urge to expand hides somethings sinister; expansion brings loss, separation, inhibition, and frustration' vibes brought to the proceedings. (Brady.)

Now if I had to guess about 'something sinister' within the conservative movement these days it would be to question the paradox of what they're doing--they want to starve the Welfare State (for the needy, but not the Corporate Welfare State) while making sure more US babies are born not aborted, so my question is: does Eugenics have anything to do with their weird plans? Do they want more white babies to grow up and vote Republican? Or is it simply a large-scale experiment upon the human race meant to usher in gene selection and other invasive DNA horrors?

Now here's a related video, War on the Weak: Eugenics in America:

*My hearty thanks to Laurie Corzett of Emerging Visions for Google Plussing a heads-up on the informative article linked above!