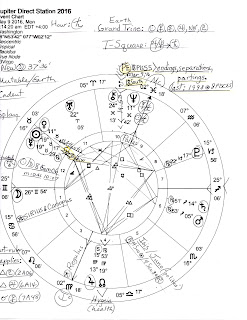 Image:Jupiter Direct Station May 9, 2016 at 8:14:20 am EDT Washington DC. Potential concerns for Jupiter in Mercury-ruled Virgo include moral and ethical values, scientific research, learning and teaching, excessive ambition, harmonious teamwork, good organizational skills, and superficial criticism. And of course, Jupiter may wear many hats such as politician, banker, guru or priest, judge or lawyer, and the General. (Edit: actor and broadcaster.)

As you see, transit Jupiter, once Direct, will encounter the North Node (NN) once again with nebulous Neptune at South Node (the tail of the dragon) so this period is half way between the Jupiter-Neptune conjunction/s of 2009 which has imprinted its issues of grand visions, speculation, and fraud upon the presidency of Barack Obama, and describes some of what he has dealt with since taking office (ex: Crash 2008, big bank bail outs, etc.)

Now the above horoscope shows Jupiter's precise moment of directional change so once the great Benefic moves forward, such realms as Jupiter rules may move forward as well though a hearing for President Obama's Supreme Court nominee apparently will not be one of them due to Republican obstructionism which is a Saturnian kind of cussedness.

Edit: neglected is a mention of May 9, 2016 as the day of a Mercury Transit to the Sun.