He Is Risen! A view of Ivanov's "Christ's Appearance to Mary Magdalene after the Resurrection"


March 25, 2016 8:28 pm edt North of Atlanta, Georgia USA: Stars Over Washington will close until Monday in fond recognition of an event which may be surveyed as a replica or an artful representation via paint on canvas, displayed just below. This evening's entry is posted here with a spirit of turning a government-related endeavor (SO'W) into a spiritual experience instead by way of religious art--and yet, so as not to mix church and state. For as you know, one concept that idealistic America was founded upon is the principle of religious freedom to worship as one believes.

And besides, all of mankind's attempts to legislate morality always fail and you'd think Washington DC in 2016 would accept this before now and stop forcing the issue.

The creation in the spotlight now for this Easter season 2016 is titled, Christ's Appearance to Mary Magdalene after the Resurrection, brilliantly portrayed by Alexander Ivanov: 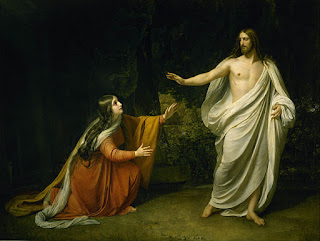 a closer view is recommended!

As you remember, Christ told Mary Magdalene not to touch Him for He had not yet ascended to His Father, Our Father...and you know what that means: Life Triumphant!

Wishing Happy Easter to All!