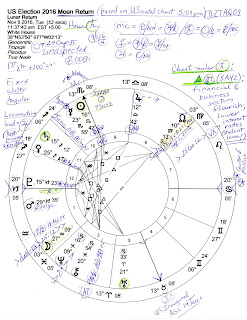 Since basic notes are penned upon our November 8, 2016 Lunar Return horoscope (please enlarge to read), I'll simply add a few thoughts in the following text. This Return chart is based on America's July 4, 1776 5:09 pm LMT Philadelphia, PA horoscope which many astrologers use as the US natal chart--the date, if not that precise moment.

On November 8, 2016 at 11:37:43 am EST, the critical degrees of 20Capricorn and 20Cancer are rising and setting which makes status quo authoritarian Saturn the chart-ruler. Saturn @15Sag 12 is in the 11th house of Groups and Associations and is within US natal 1st house having been plopped on our nation's Ascendant, crossing and recrossing, for some time during which we've seen Republican attempts to hold Hillary Clinton accountable. Some little effort has been made to hold Donald Trump accountable for his several financial irregularities as well, and of course, President Obama never completely escapes the moral high horse of the Republicans.

Yet Moon Return Saturn provides a bright note. See it, upper right on the chart for chart-ruler Saturn applies to a trine with Uranus in 3rd house, giving a lift to business and financial sectors, and possibly affecting student loans or other economic matters. (My nag in the race is eternally the American people, oppressed by a greedy ruling elite.)

Then there are the Democrats--those who fund them and those who tend to vote for them--who have also participated to varying degrees in the Hold Accountable Political Sweepstakes as transit Saturn has lurked about, ready to file lawsuits if they were deemed beneficial to the litigant. Tragically for the American people and our form of government, our degraded justice system has continued to perform in a less than stellar manner as our nation's formerly exalted-in-Libra Saturn now progressed and retrograde in betraying Scorpio can attest.

So is this a significant synchronicity we see with a US Lunar Return occurring on a very important Election Day? To me it seems so. Here the Moon (27AQ09) rises in the 1st house but only after contentious Mars, at a critical 29th degree, rises. Powerful, wealthy Pluto has just arisen @15Cap23, conjoined with the lovely fixed star, Vega, and a few hours earlier, the Sun arose with Vega (aka, Wega), a star with potentials for: luck in Politics, wealth through dealing with the government, but also fleeting fame and double dealing. Problems via mother also may apply (A. Louis).

And with Mars and Pluto (ruler and sub-ruler of Scorpio) rising, we have what may be a picture of force, violence, compulsion, war, and/or nuclear potential rising. The 7th house of Partnerships and Open Enemies may be involved since the Moon is ruler there with 20Cancer on the cusp and Twin stars Castor and Pollux spotlighted, the light and dark twins. Both stars denote creativity yet murder and other crimes and scandals are tucked away for future reference (via either the Clintons or Mr. Trump, if he's the GOP nom.)

Okay, there is much more to say about this curious horoscope with its synchronicity standing out like a you-know-what thumb but I won't just now--except for one question: is a Lunar Return on Election Day 2016 a symbol of the American people (Moon) re-turning to Hillary Clinton, also signified by the Moon (a woman)? The planets are in a Locomotive shape with political planet Jupiter in the lead and indicating a high-powered executive. The Scorpio Midheaven, Sun, and Mercury (just past Hillary's Mercury Return!) seem to whisper if not shout her name while wifely Juno (politics) @00Sag conjoins Hillary's natal Jupiter. Also @00Sag is the day's Sun-Saturn midpoint which hints at good fortune for an older person (Grandma Hillary?) and this pile-up spotlights the degree's Sabian Symbol: "A Grand Army of the Republic Campfire." Plus, Sun-Saturn links to karma and Mrs. Clinton apparently expects to garner the White House Oval Office for her past efforts towing the Global Government line (which must include the corporate coup, the TPP).

This militaristic word picture reminds me of Hillary Clinton as neocon with her warhawk-esque stance that the baton-passing on January 20, 2017 will give a nod to in Washington's quest for perpetual war and world domination. Was she anointed from the start to follow the 'new world order' script? In my opinion, yes, she was, and the overblown Political Theater which the Mainstream Media has pedaled 24/7 as "Campaign 2016" has done its best to disguise that very sad fact.

Now let's close with the one chart factor that may override all the others and 'run away with the chart' and the day's big event: Mars at a critical 29th degree is unaspected. Is this Donald Trump going it alone to the White House? Perhaps, or does Mars represent former President Bill Clinton who will be the very first First Gentleman we've ever had in the White House? It may even be the temperament of Hillary Clinton which the latest tell-all book says was explosive and nasty in her days as First Lady. Well, I'll add here what I understand about an unaspected Mars and let you decide his or her identity--or identities:

When Mars, the planet of motivation, energy, and action is not aspecting other planets (actors) in a chart it is able to express its traits in an undiluted, unrestrained fashion since limitations from other planets are nonexistent. This is a first-house Mars rising which emphasizes its Aries nature and its aggressive warrior tendencies. Here, Mars rules the 3rd house of Communications and the 10th house of Career and Public Status so these departments are where his unrestrained, boundless energies will express most visibly.

An unaspected Mars tends to be self-centered which may be seen as he acts in his own self-interest (this describes most politicians in general!). He prefers to be in constant motion, always on-the-go, or, he may operate in fits and spurts. A lack of compromise may also be evident along with an independent mindset that is compulsively one-pointed in its focus. Although components in his psyche are missing, boundless enthusiasm may be noted though the negative Martian traits such as aggression, anger, violence, a me-first attitude, and foolhardiness (where angels fear to tread, etc) are unmodulated by planetary influences for he listens very seldom to others and disdains advice. Bad tempered may be a mild description depending on how often things go his (or her) way.

Then if we add a Martican 'never admits to his mistakes' we can envision Hillary's fly in the ointment as Mr. Trump playing the spoiler role as the unaspected Mars who runs away with the Oval Office on November 8th. Plus, there's Mars' Sabian Symbol for '30Cap': "A Secret Meeting of Men Responsible for Executive Decisions in World Affairs"...'EXECUTIVE POWER' (Rudhyar), a picture which speaks of an 'occult hierarchy' and a 'supreme Council of quasi-divine Beings.'

Hmm. That sounds like those who select presidents--those often described by Max Igan as, "the powers that think they be."

But then there is the feminine influence on US Presidential Elections of the 8-year Venus Cycle...