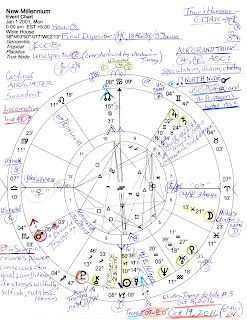 Here's a re-publish of the New Millennium Horoscope set for January 1, 2001 12:00 am est White House Washington DC. My primary concern is the October 19, 2016 Mars-Pluto conjunction which occurs upon the South Node at 15Cap31 in 4th house of Domestic Scene, Homeland, Foundation of the Matter. And of course, the 4th house is also about Roots, Endings, and The Drain.

Trump and Clinton, Clinton and Trump

Now if you follow politics and the 2016 Campaign, you know that October 19, 2016 is when the third and final presidential debate occurs between Republican nominee Donald Trump (who just may be represented by the Scorpio Mars leading all the planets in a Locomotive shape from the 2nd house of the National Treasury (US SP Jupiter Rx = money, corporatism, the politician, and The General)...or not, since perhaps it's Mrs. Clinton whose natal Sun is in early Scorpio, and both candidates have the executive ability a Locomotive shows).

Also, Democrat Hillary Clinton's natal Moon in Pisces is represented by the Moon in the New Millennium's 6th house of the Military, Police, and Civil Service (and Pisces = the server). Yet as always, her aggressive Mars-Saturn-Pluto trio in Leo 'runs in the background' of her political career and falls within the 11th house of this chart which to me suggests her neocon/war-hawk stance and the people and groups she associates (11th h) with who have similar goals of world domination.

And as you see, the New Millennium's difficult Mars-Saturn midpoint at 14Leo49 is also in 11th house and conjoins Mrs. Clinton's natal trio in Leo. In 3rd house you can see Mr. Trump's natal Moon-SN conjunction which conjoins the New Millennium's Chiron and this may signify the crises and wounds that many Americans intuit a Trump presidency would bring, and/or the 'blindspot' (Chiron) of some voters who have fallen for his promises of Making America Great Again.

Additionally, the detached and out-of-bounds Mercury at 14Cap36 conjoins the Saturnian, separative South Node in the chart which is a 'natal echo' of Clinton's Mercury-SN conjunction in Scorpio. Mercury-SN tends to have ideas ahead of its time and/or may signify past ideas and plans which here relate to the Pentagon since the 10th house North Node conjoins both the Pentagon's natal Ascendant and US SP (progressed) Jupiter Rx at 15Cancer--tragically describing America's past and future war path.

Now my assumption is and has been that the war costs of global conquest and other Pentagon programs (ex: black ops, invasion and occupation) have drained America's National Treasury and other resources, a condition hidden by our fiat money. So basically, the South-Node-Mars-Pluto condition indicates the US military chiefs falling back on past behavior (SN) and suggesting turbulent, possibly violent, events (Mars-Pluto) timed by the conjunction's Saturnian (Capricorn) hook-up with the New Millennium Nodal Axis of meetings, encounters, and past vs future direction...Mars-Pluto = SN.

Or, perhaps this is merely a cosmic picture of Campaign 2016 and the ruthless rivalry between our two political parties for control of the White House megaphone and our political discourse.

Now here are what I see as the stand-out planets in the New Millennium chart and why they are prominent:

1. Mars in Scorpio conjunct 2nd cusp because it leads all other planets via the chart's Locomotive shape and describes people with executive ability who command success;

2. 3rd house Pluto in Sagittarius (conjunct US Ascendant in the late-afternoon 'Sibly chart') because Mr. Underworld, planet of hidden wealth and criminality, is unaspected and therefore isolated from the rest of the planets (actors), a condition which denies them the benefit of plutonian regeneration;

3. Uranus in its own sign of Aquarius in the 5th house of Speculation, Gambling, and Creative Pursuits because Uranus is a reformer, a rebel, an anarchist, and a troublemaker and is the Final Dispositor of the entire chart since the 'trail of dispositorship' leads back to Uranus in Aquarius.

Naturally there are many other chart factors of note than these but my main purpose today is to re-post the New Millennium Horoscope for you and remark upon the significance of the October 19th Mars-Pluto conjunction perfecting on the very day of the third and final presidential debate of 2016--and add that the Pre-Natal Solar Eclipse Series of the New Millennium (2 South on December 25, 2000 at 4Cap14) repeats during the last year of the presidential term of whoever is (s)elected on November 8, 2016--because 2 South manifests once again on January 5, 2019 at 15Capricorn25 which echoes and conjoins the 2016 Mars-Pluto conjunction.