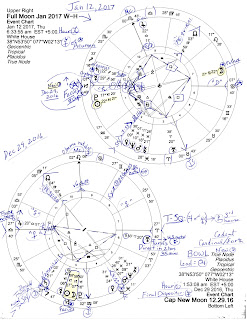 The first lunation of 2017 in January, a Full Moon in Cancer, falls between the Dark-and-Light Twin Stars Castor and Pollux. Both stars suggest creativity, in writing particularly but Castor's potentials also include such things as: sudden fame or loss, crippling of limbs, mental illness, and murder, while Pollux's potentials are: murder, disgrace, rape, cruelty, success with Astrology or the occult, and danger from large animals, poisons, or...women.

As for Washington DC, on January 6, 2017 the new 115th Congress convenes and puts their official stamp on the December 19, 2016 Electoral College vote for Mr. Trump. You remember December 19th - when the Electoral College failed in its prime mandate to protect the US presidency and the American people from a dangerous demagogue president like loutish Donald the Demagogue? Still, my hopes are for Trump's 'plans' to work for the benefit of all Americans - even though the billionaire class he favors already has a huuuuge running start.