Is It Fair to Compare Trump to Hitler?

Having just read History Today's thoughtful article To Think Is to Compare: Walther Rathenau, Trump and Hitler and considering the comparisons made here on SO'W concerning the Astrology of both men whose rises to power contain curious correlations, it occurred to me (for some unknown reason) to progress the natal chart of Adolf Hitler to tomorrow and I discovered that the very day marks a Progressed (SP) New Moon @3Vir28. Knowing that this is the position of the transiting North Node (NN) I set up a bi-wheel of Hitler's SP New Moon chart with the appropriate transits (February 24, 2017 12:28:29 pm CET Braunau am Inn, Austria, his birth location) around it: 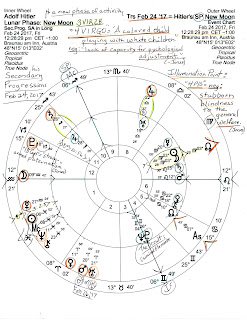 As you know, a Secondary Progressed New Moon phase indicates a new cycle of activity for those who live. Posthumously, it denotes a new cycle of activity by others such as those who follow (or followed) the ideology and/or agenda of the native in question. In addition to the NN (public contact; future direction) pointing directly toward Hitler's SP New Moon today are transits to his SP Jupiter and SP Uranus by Saturn and Jupiter, respectively. And since the Virgo-Pisces polarity (victim-savior) is intercepted, there is karma (reaping what's been sown) hidden in his SP chart--Virgo, the sign of purification and discrimination.

His true heritage was hidden or unknown during his lifetime, perhaps, but it seems that Adolf himself had Jewish and 'brown' ancestry. See: Hitler Had Jewish and African Roots, DNA Tests Show. Ruh-roh! Unless this is 'fake news', aka, propaganda, we're not so very 'pure' after all, are we, Adolf? Well, few people are of one race these days! I've been learning from my genealogy research what a hodge-podge of genes I and my family are--along with most everyone else.

So in Hitler's Progressed chart, today's transits spotlight Jupiter Rx in Libra and Saturn in Sagittarius, the two societal planets while the Jupiter-Uranus combination suggests the political conflicts we're currently mired in these days especially those having to do with seizing power, ethnic cleansing ('purification'), racism (brown races vs white--see the Sabian Symbol, below), genetics (eugenics), wars and the subsequent migration of refugees, intolerance toward immigrants ('the other'), the erosion of civil liberties, mass murder, anti-semitism, Corporatism, Nationalism, Socialism, Neoliberalism, isolationism, neo-nazism, protectionism, statism, globalism and global government, and other problematic societal issues both in the news and otherwise.

And naturally you know that underneath it all, the timely transit of gold-hoarding saboteur Pluto now creeping through Saturn-ruled Capricorn = the dictator (Ebertin)--and he's at the '18 Capricorn' "smug or strong-armed paternalism" degree of POLITICAL POWER (Jones). Apparently, the globalists' 'big picture' will come into sharper focus under a man known as Donald Trump.

So let's check with Marc Edmund Jones and the appropriate Sabian Symbol's negative expression, plus, the unconscious, opposite Point of Illumination for Hitler's SP New Moon conjoined by the transiting NN (rounding up):

And so I ask, Is it fair to compare Trump to Hitler? Mr. Trump would probably assert that it isn't 'fair' since that's one of the main cries of Jupiter in Libra (and his is stationary direct in his natal chart). And yet there are many observers of history who disagree. So if you're curious, here are eight related posts concerning the 'Trump and Hitler' phenomenon:

The Fascism Rising Solar Eclipse of 1933 (horoscope shown) which occurred 84 years ago tomorrow @5Pisces; of course, 84 years is a cycle of Uranus (Trump's oriental planet that leads the rest) and Uranus is the planet of war, rebellion, revolution, sudden reform, anarchy, chaos, lightening bolts, and awakening;

The Fascist Personality and Rhetoric of Donald Trump (video);

The Reichstag Fire and Donald Trump (with horoscope);

Astro-Notes on the Capulus of Donald Trump;

And so I must assert that Astrology supports the evidence that it is fair to compare Donald Trump with Adolf Hitler, not because I prefer to, but because a fascist rise to power was missed or ignored in its early days when something could have been done to stop its atrocities and suffering and in 2017 must not be missed or ignored again. Hitler's Progressions show a 'new cycle of activity' beginning symbolically this very day, a beginning which is completely unwelcome from my personal common-good perspective.

And planet Uranus, The Witness, says, Awake! But will you?