Recently we discussed how, beginning in 2016, transit Neptune @11Pis11 has been in process of conjoining the Prenatal Solar Eclipse that preceded the American Revolution (third of three conjunctions on Feb 16, 2017) and considering how active within The Collective (part of Neptune's realms of the Unconscious) astrological Neptune is these days with its eroding and falsifying influences, its off-and-on lack of aspects to other planets, and its Piscean 'Final Dispositor' condition (all comes back to watery, oily, gaseous, poisonous Neptune) in many recent horoscopes, perhaps a peek at the current progressions that issue from the American Revolution natal chart is in order for clues on how the energies of our founding Revolution have evolved in 2017.

Now you've certainly noticed that the words and concepts of "revolution" and "resistance" have been popping up more frequently in public discourse under the administration of one Donald Trump (who isn't as popular as he imagines--his Mercury-Neptune square distorts reality for him). In America there are currently at least two groups formed against Mr. Trump and his policies: The Resistance movement, plus, an organization called Indivisible.

As a timing device, Secondary Progressed (SP) Moon in any chart provides useful information and can help zero in on when events may occur. Below is the SP Horoscope of the American Revolution dated April 6, 2017 12:30 am 'LMT" in Lexington, Massachusetts where the American Revolution's First Shot Heard Round the World was fired. The date and hour result from SP Moon precisely conjoining SP Saturn @19Lib37 in the 11th house of Groups and Alliances and you may recognize the degree's closeness to US SP Mars Rx @18Lib+ (since 2006--our police state of militarized police forces, secret wars, civil, voters', workers', and women's rights under threat of rollback, etc): 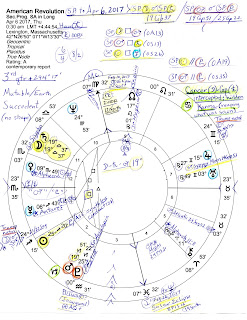 The Hour belongs to Saturn and as you see, SP Mars of warring fame nears SP Pluto of control and coping fame in the 2nd house. Fixed stars are not used in progressions but the ones conjoining these SP planets are entered on the chart to suggest their 1775 positions progressed to our current era.

Related Posts: Feb 2017 Solar and Lunar Eclipses (charts shown are set for Washington DC) and The Horoscope and Quest of Thomas Paine.