Feb 26, 2017: this morning a Solar Eclipse manifested at 9:58 am ET @8Pis12 and tonight activist Mars catches up with radical *Uranus @21Aries, an explosive, often violent combination of energies. This got me thinking about how the Third Reich recently had its Uranus Return/s to natal Uranus degree (19Ari53). These returns were exact on June 17, 2015 (the day after Mr. Trump first announced his presidential bid from behind the shadows of a New Moon @25Gemini), September 4, 2015 (Rx), and March 31, 2016, dates which cover America's 2016 Campaign period and as we now know, the Klan and 'alt-right' folks were preparing to move into the White House under the coattails of Mr. Trump. And so a new cycle of Uranian activities (ex: politics) has begun for Old World Nazis, and I assume, for neo-Nazis, with a devilish force still plaguing the world.

Here's a view of the Third Reich natal chart of 1933 which is the horoscope and data from which issue the following Secondary Progressed (SP) New Moon of the Third Reich, a symbolic 'new cycle of activity' for an organization that is much much less popular than its adherents seem to believe it is: 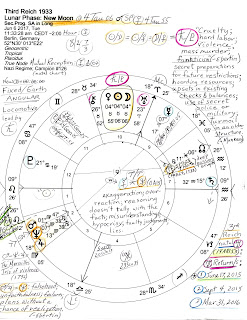 SP New Moon @4Tau06: It's an Hour of Venus with Venus in one of her own signs, Taurus (the bull), a placement denoting conservative values and a love of jewels and luxury. Also, Venus is in the same degree as the SP New Moon giving a karmic flavor to the chart and cycle yet it is radical zealot Uranus @23Ari58 (the Utopian in Aries) that is nearer the Midheaven (MC = The Goal). Could Uranian favorites chaos and anarchy be on the organization's agenda? The Sun rules the chart but makes no applying aspects at all so 'Sun in 10th house in Taurus' sums up the solar influence while the Taurean Venus rules the roost.

Sun Taurus-Moon Taurus is a double Earth blend of pragmatism, rigidity, and obstinacy. This security-seeking blend saw a certain propagandist and 'social scientist' born under its rays, a man known as 'Karl Marx' (Levi's pen name) who famously promoted the tenet, "From each according to his ability, to each according to his need." Who decides what everyone needs and how much I shall leave to your imagination. Just remember that 'Karl Marx' was funded by the House of Rothschild (N. Hagger, The Secret History of the West).

And as you see in SP 2nd house of Money and Values, the 'Marseillaise Trio' of Mars-Neptune-Jupiter remain a trio as in the natal chart and suggesting violence, terror, and cruel oppression as keyed during the French Revolution. A midpoint picture is formed: Mars-Jupiter = Neptune: falsehood; unfaithfulness; failures; plans without a chance of realization (hopefully so! jc) -- are the potentials, according to Reinhold Ebertin. No fascist USA! is one slogan on display during some of the many protests across the nation since Mr. Trump moved into the White House.

In addition, the violent Marseillaise Trio was a factor on the night of Hitler's Reichstag Fire through which his fascist dictatorship was firmly established. That night, the line-up was Jupiter-Mars-Neptune which emphasizes the speculation and conflating ability of the trio with arsonist Mars in the middle and the Jupiter-Neptune pair relating to political conflict and monetary fraud and waste.

Another 'as you see' in the SP chart is the stunning and disturbing conjunction of the SP Saturn-Pluto midpoint of cruelty, brutality, and violence (see upper right) with the New Moon. This dynamic should be unsurprising to most people who have no trouble mentioning the Nazi's treatment of the Jewish people when speaking of the Holocaust Memorial (unlike Mr. Trump who has himself been the cause of turmoil, use of the military for domestic actions (so far, against immigrants), and 'upsets in existing checks and balances' within our three branches of government. This is a crude man who uses a private police force causing some to assert that Mr. Trump is "playing with fire"...though not a Reichstag Fire, one wants to assume.

Okay, I'll hush for now. In closing, here are two links--one to an essay concerning tThe Rise of Nazism in Germany (opinions are the author's own). The other contains Astrology and also an interesting video concerning The Fascist Plot to Take Over the US in 1933.

Thankfully, America had General Smedley Butler to foil the plot then...who do we have now?

*This evening's Mars-Uranus conjunction @21Aries at 7:19 pm ET is basically a Mars Return to the Economic Unification chart of Germany as given in The Book of World Horoscopes (chart #132), by Nicholas Campion. The simultaneous transit of Uranus to natal Mars supports the notion of the Third Reich's SP New Moon 'new cycle of activity' since it relates to taking a new approach or direction made suddenly necessary due to circumstances. Actions are highly charged under a Uranus-to-natal-Mars transit, outcomes are unpredictable, there may be separation or estrangement within relationships with males, and it's a dangerous time to confront adversaries. Mars-Uranus when paired also indicate potentials that include operations, accidents, injuries, premature actions, willfulness, intolerance, a test of nerves, fighting for freedom, courage, and/or a struggle for survival (Ebertin).

And speaking of Economics, as of December 2016, Germany now heads the 2017 G20 Summit with the prominent Leaders' Summit scheduled for July 7 and 8, 2017 Hamburg, Germany. Later on we'll have to Moon Track that pretentious gathering of social and economic tinkerers in case there are influences they prefer we not see. Here's a page with a Timeline of G20 2017 events for your perusal.

View a brief bio and the natal horoscope of Karl Marx born May 5, 1818 during the 19th century Uranus-Neptune conjunction in Sagittarius squared by Pluto in Pisces and, as previously discussed, via transit Pluto @18Cap-- 1993 Uranus-Neptune = 2017 Pluto: the big picture commands a certain course of action, very little option to do otherwise (Tyl) which is the intimidating command that world domination types are currently acting under and why Hegelian chaos is underway via Mr. Trump and his minions. Or is he one of their minions?