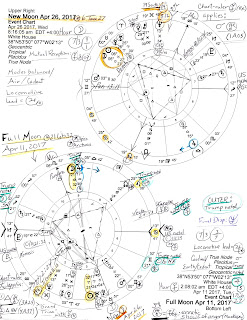 Image lower left: April 11, 2017 Full Moon @21Lib32 2:08:02 am EDT White House Washington DC in 9th house of Legal Affairs; Hour of Venus (valuable things) which rules the Libra Full Moon, 4th and 9th houses; Locomotive shape of success with high-powered executive (CEO) Jupiter Rx leading the engine and in process of completing Donald Trump's Jupiter Return to natal degree (17Lib27 Station Direct in his 2nd house of Money and Values); US natal Sun @13Can19 sets along with our natal Jupiter and Venus in Cancer and powerful wealth-hoarder and manipulator Pluto rises in 1st house denoting difficult to control conditions of profound change and transformation in government, business, and/or law (Capricorn).

Outer = Mr. Trump's natal planets, highlighted in turquoise; Mercury Rx in Taurus will be Rx in Aries in the New Moon chart. One midpoint picture--Venus-Mars = Uranus: erratic show of anger (Munkasey); if we count the Jupiterian North Node there's a 'Grand Trine' between Mercury Rx, NN, and Saturn with erratic radical Uranus nearby. Also note that in both lunation charts are intercepted signs denoting secret, hidden, and/or karmic conditions.

Image upper right: April 26, 2017 New Moon @6Tau27 in the 12th house of Politics, Karma, and Back Room Deals; Hour of the Moon (fluctuations, changes) which rules the 2nd house of the National Treasury and the 3rd house of Communications and Lower Education; trickster Pan rises just after Mars in early Gemini (a US Mars Return soon). This position of Mars is a transit to Mr. Obama's natal Moon indicating a period of anger and annoyance, and although Mr. Trump's natal Mars and Ascendant in Leo are not marked on the New Moon chart (as on the Full Moon chart), they and royal Regulus are constellated around the IC of the New Moon in DC while Trump's natal Jupiter is in the 9th house of Legal Affairs, Foreign Lands, Higher Education, and Ideology.

There are plenty more noteworthy chart factors, of course, and you may want to delve more fully into April 2017 planetary and political conditions as they approach (apply), meet (conjoin), and recede (wane or separate).