Have you noticed that soul-crushing, anti-democracy authoritarianism is on the rise across the globe? Donald Trump in the White House is America's primary symptom of its Saturnian paternalism as we find in the current picture of transit Pluto @18Capricorn hitting the Uranus-Neptune conjunction degree (1993) which times a certain midpoint picture--Uranus-Neptune = Pluto: 'the big picture must be followed, very little option to do otherwise' (Tyl)--and this, triggering the word picture for 18 Capricorn: POLITICAL POWER...negative expression: smug or strong-armed paternalism' (The Sabian Symbols in Astrology, Jones).

Of course, authoritarianism has been rising in America since before Trump entered the White House and one astrological timer I noticed years ago was the December 30, 1999 Great Conjunction of Pluto and Chiron, one of the astrological pairs of plutocracy, oppression, racism, and various other -isms such as Authoritarianism, Communism, Socialism, Bolshevikism, Capitalism--all terms invented by man to promote one oppressive scheme or another---and to divide the populace against itself.

Thing is, the 1999 Pluto-Chiron conjunction occurred @12Sagittarius which is the Ascendant degree in America's 'Sibly' horoscopes (July 4, 1776 5:00 pm LMT or a few minutes later--I use 5:09 pm which places 00Libra at MC and Aries Point at IC). This oppressive conjunction of primal violence helped to usher in the New Millennium. (View the chart when the Trump-Clinton debate of October 19, 2016 was timed by a new two-year cycle of brutal Mars and Pluto melding their powers at the South Node of the New Millennium).

And yet there is good news! For there are ways of countering, even stopping (Saturn) authoritarianism in its hoof-shaped tracks as someone at The Guardian advises us:

Authoritarianism is making a comeback. Here's the time-tested way to defeat it. "Tyrants' tactics require the consent of large numbers of people. The first lesson, then, is not to obey in advance."

Another sign post of authoritarianism (and the tyranny of plutocracy) infecting America in 2017 is our national Saturn exalted in Libra (14:48 in 1776), sign of the Scales of Justice, which by progression, turned retrograde in Mars-Pluto-ruled Scorpio (where our SP Saturn remains) in 1996 during the second presidential term of Bill Clinton whose tenure included impeachment and thus the undermining of the Executive Branch through the eager auspices of the Republican Party.

So now, in 2017, will the Democratic Party return the 'favor' and oppose the extreme authoritarianism of austerity-promoting Republicans and their mascot Donald Trump? Probably not with the nerve and verve needed (although they did stand up last night concerning the secret Trumpcare bill). But it requires We The People to defeat it by participating in this democracy (such as it is) using the peaceful tactics mentioned in the article linked above!

Now, in case you haven't seen it before, below is the horoscope of the Pluto-Chiron Conjunction of December 30, 1999 (@11Sag22--two esoteric numbers x two!) with my study notes penned on (please enlarge). You'll want to consider that Pluto-Chiron = Moon-Neptune and several other planetary factors including the Mother of All Eclipses of August 11, 1999 @18Leo in the 1 North Saros Series in this chart's 8th house of Corporatism, Big Money, and the Occult--and 1 North repeats upon this chart's 9th cusp on August 21, 2017 @29Leo, a critical degree--The Great American Eclipse--and I assert that there continues to be some weird plutocratic timing going on and we can expect global government (aka, a new world order) to be termed 'necessary' to solve the world's problems (which international bankers and their handmaidens, the political elite, created): 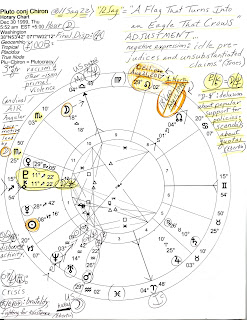 The duration of the Pluto-Chiron cycle is approximately 60 years in length and relates to "mass currents of consciousness--the collective unconscious, the racial, cellular, molecular, atomic, and subatomic levels of reality. The beginning of the cycle...signals the up welling of an initially unconscious impetus seeking expression as a historically necessary transmutation." (Chiron, Richard Nolle). (My italics.)

Also note that, among other things, 'Moon-Neptune' = mass un-consciousness, or, the Collective Unconscious. And thus, globalists have many of us thinking on a subliminal level that authoritarian global government is inevitable. It is not.