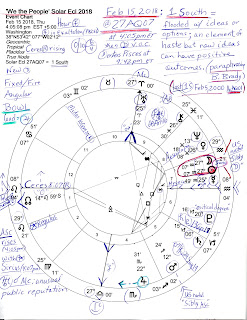 Image: 'We The People' Solar Eclipse February 15, 2018 @27AQ07 so labeled because it eclipses US natal Moon in the 'Sibly US foundation horoscope' (July 4, 1776, late afternoon LMT with Moon in third decan of Aquarius. A late afternoon chart is one of many versions although other dates are potentially more foundational; some charts are set for Philadelphia, Pa).

As seen in the horoscope, the opposite sign and degree, 29Leo21, is on the 2nd cusp of the National Treasury which in part stimulates themes of The Great American Eclipse of August 21, 2017 (info is distorted and possibly false; unexpected events place great pressure on relationships; fatigue or illness possible) and spotlights the natal Ascendant of Donald Trump along with royal Regulus (success if revenge is avoided). Have more waste and fraud of taxpayer money been perpetrated? If so, my suspicion is that some Trumpsters have engaged in additional pilfering, embezzlement, and/or theft via other areas besides private airline travel. Is this eclipse indicative of our National Treasury dangerously at risk? It so often is, you know. And there's quirky maverick Uranus at MC (Goal Point; Aspirations), planet of radical reforms, revolts, disruption, upsets, activism, fanatic zealotry, Utopianism, and those with unusual reputations in the world.

So you can suss out more factors in this chart and the solar eclipse for yourself, right? And you see listed on the chart under the eclipse info that 1 South's last manifestation was on February 5, 2000 @16AQ01...and you know what lay ahead at that point just prior to the much-touted practically magical and numinous 'New Millennium', don't you? The propaganda, paranoia, and glowing promises? Y2K madness? Tech bubble bursting? If you're old enough or can read, that is!

Now as this eclipse perfects at 4:05:08 pm EST, rising in Washington DC is dwarf-planet-archetype Ceres (food supplies, grains, milk, motherhood, sustainment, distribution, symbolic sheafs of wheat of a Virgoan goddess variety, and more) and she's retrograde suggesting a slow down or delay of some sort (FEMA difficulties come to mind). Yet with the fortunate North Node of the Moon in 1st house some development or growth with beneficial results is possible. Then in 7th house South Node @15AQ59 conjoins the degree of the Lunar Eclipse of August 7, 2017 so that similar issues or events of that period may return for further development, or may reoccur in similar fashion. Plus, North Node in Leo suggests festivities, entertainment, and a love of pomp such as an acting POTUS might have to endure. Or demand, depending on his personality--mild or brash.

And then with thinking Mercury in Aquarius nearby the eclipse, logic and common sense are needed for best karmic progress to be made for the sake of society, as suggested by a solar eclipse manifesting in cool, detached, rational Aquarius, the sign of We The People's Moon, as some believe, and a Tech, Science, and Futurism indicator.

As the BOWL Tips

Leading a BOWL shape of all the planets is Jupiter @22Sco31, 4th house, with Jupiter the General, CEO, politician, and/or preacher as the basis of it all and watery Scorpio as the sign of Big Business, Stealth, Wealth, control and/or betrayal. Are there more leaks of private information on the way? A BOWL shape emphasizes one hemisphere over the other and here we find signs Taurus through Libra 'missing' along with the related experiences described by those realms. Only the 1st house North Node links the two halves of the chart across the self-other axis.

The orientation of BOWL personalities can be advocacy of a cause, the furtherance of a mission, or perhaps it's based on divisions (and the furtherance of them? Trump!) The strongest point of application is the leading planet if it is in a Grand Cross pattern or in strong opposition which this Jupiter no longer is for the Jupiter-Uranus opposition is weakened with money-bags Jupiter in financial Scorpio and Uranus still in Aries. And yet, BOWL folk have something to give their fellow man and it may be "constructive or vindictive" (Jones) and will probably come by way of Jupiter in Scorpio (which is Reagan's natal Jupiter sign = massive tax cuts for the rich as Democrats in Congress enacted October 22, 1986?)

Now all this eclipse action is on the Leo-AQ self-will axis so Mr. Trump, the most famous Mars Rising in Leo fellow of bravado and quarrels that we know, is suggested on various levels of activity and events brought by the eclipse. However, it's important to note that it's Trump's natal Pluto @10Leo that is his first natal planet to rise in this particular horoscope so make of its power potential and wealth-grabbing-and-hoarding what and as you will or may.

For as you know, all eclipses are 'wild cards of the Universe' and 'cosmic blinks' that indicate times of change, pay attention--and those changes may involve sudden disruption, like astrological Uranus tends to do. Or not. Sooner or later. Or not at all. Because you know what they say about The Sky God: Expect the Unexpected and you'll never be disappointed.

A Previous Post: The Solar and Lunar Eclipses of 2018 with Themes.