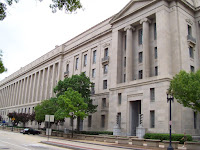 November 22, 2017: today I've been messing about with the Department of Justice (DOJ) natal chart which is displayed in a previous post of 2016 titled, Shadow into Light: an Esoteric Department of Justice. DOJ Jupiter, the planet associated with justice, is @3Sco10 (closely conjoining US SP Saturn Rx, our nation's progressed Saturn position these days since 1996--US Saturn no longer in balancing Libra, now in Big Business Scorpio) and since transit Jupiter has now entered Scorpio, I peeked to see when another Jupiter Return would occur for the DOJ (the last was on November 9, 2005 with a Jupiter-Uranus trine 3A41). The current Jupiter Return occurred on October 25, 2017--synchronicity! since October 25th is the DOJ's 'birthday' (1934, with FDR presiding in Masonic ceremony--follow link, above to view its natal or or founding chart). Now the DOJ's Solar Return 2017 occurred the evening before--October 24th, to be precise, as Solar Returns will sometimes do.

In the DOJ Jupiter Return chart, justice-seeker Jupiter is sandwiched between the Sun @1Sco57 (as in the natal chart) and Mercury @12Sco30 with the planetary trio in Return 4th house. With 6Leo55 rising, Sun is chart-ruler and applies once--to a conjunction with Jupiter so the whole shebang is a very Sun-Jupiter affair. So from late 2017 and for approximately the next 12 years the DOJ will express its Sun-Jupiter tendencies for good or worse. Potentials indicated by Sun-Jupiter are long distance travel, cultural and social events, intellectual pursuits, courageous actions, self-confidence (maybe too much!), and generally, busy activities within the judicial system. However, Mercury in Scorpio is apex of a midpoint picture (Mars-Saturn) denoting bad news, as in bereavement.

Another stand-out feature of the DOJ Jupiter Return 2017 chart is disruptive rebel Uranus @26Ari18 Rx conjunct Return Midheaven (MC), a marker for potentials such as dramatic reforms and adjustments in career and/or public status (the US is trending down already), sudden reforms that affect every department, geographic relocation for someone, and/or change of profession. These events we have already seen via firings and resignations, a familiar theme of the Trump and GOP agenda as they 'slim down' government until it starves (or can be drowned in a bath tub a la Grover Norquist).

Then in May 2018, a series of three Uranus Returns begin to manifest for the DOJ, a time when the past no longer holds sway and there's no telling what the current crop of Uranian Utopian anarchists (Uranus in Aries) have in mind for our judicial system--apparently a new direction or an unorthodox goal. (Nothing good to my way of thinking.) Because once a country's court system is corrupted to the core, it's down hill from then on, I'm very sad to say. Not that the US Judicial System was ever perfect, of course, but we'll know what we really had once it's completely gone--undermined and perverted by infiltrators of the betraying kind.

Now here are the three dates of the DOJ Uranus Return/s to natal position of 29Ari21, a critical, impatient 29th degree which points toward May 15, 2018 when transit Uranus bursts into Taurus (horoscope shown):