Jupiter in Virgo and The Ethics of Robert Mueller


In the Realms of Jupiter

Here is how a recent post concerning the natal Jupiter of Donald Trump began with an explanation of Jupiterian personalities such as Mr.Trump whose Libran Jupiter is quick to call out, "it's not fair!":

"We no longer live in religious times, but the human need for the numinous, for something greater, more perfect and more powerful than ourselves has not disappeared. It has, however, taken a perverse turn. Instead of aspiring to the Infinite, we make gods out of mortals. We create 'super-stars' of athletes and artisans. We inflate, glamorize and worship actors, sports people, and musicians. We exalt them in other words. This phenomenon of elevating the ordinary to the extraordinary is a quality of Jupiter and Sagittarius (not so much Pisces). It emerges at the behavorial level in two basic ways:

1. The mantle of hero or king seems to fall most easily on those strong in Jupiter or Sagittarius.

2. Equally, the Sagittarian-Jupiter type can have a more than average tendency to idolize and hero worship. - Paul Wright.

As you know, Robert Mueller enjoys a longstanding reputation for integrity and independence. Therefore, let's consider the moral and ethical implications of astrological Jupiter (a boundary-crossing freedom lover) and its sign in his natal chart. Mr. Mueller's natal Jupiter @2Virgo38 sextiles his natal Saturn (@5Can59--conjunct US natal Jupiter). With no accurate birth time for former FBI director Mueller I'm looking at a noon horoscope for August 7, 1944 NYC. 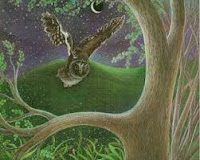 The Totem Animal of Pallas (aka, Minerva): The Wise Old Owl

But first here's an assessment by millennial astrologer Kevin Estes who analyzed Mr. Mueller's ethics via his natal Pallas (@27Cancer--in Cancer = a protector of home and family) which conjoins natal North Node, a point of public contact, publicity, and future direction:

Authoritarian - nothing. This suggests very strong ethics which isn't a surprise considering his actions and how he's handling the attempts to discredit him by the right." Thanks Kevin!

This supports Mueller's placement of Jupiter in Mercury-ruled Virgo which denotes a man with an expanded ability to discriminate and an innate understanding of the appropriate use of such discrimination. Attention to minute detail and organizational ability are talents and in a practical Earth sign, Jupiter tends to take on responsibilities and possess a large quantity of physical energy. Steadiness, reliability and pragmatism are in evidence. Why a Virgoan Jupiter alone grants its holder ethical and moral values!

And when Jupiter sextiles Saturn (the two societal planets relating to balance, and in government, to 'checks and balances') we find a man for whom self-improvement and accomplishment are lifelong pursuits. This sextile suggests a modest and conservative fellow who prefers traditional philosophies and who solves problems with a pragmatic approach.

Slow and steady development (as political pundits have credited him with during the Russia-Gate investigation) is his modus operandi with Jupiter in Virgo yet he seeks recognition and at times may fail to recognize his own limitations. Therefore, proper guidelines must be followed because over extension often leads to failure and, in addition, budgets must be carefully managed by this magnetic, intense loner (Sun conjunct Pluto in royal Leo).

For more astro-notes on Special Counsel Robert Mueller you may wish to see The Prenatal Eclipse of Robert Mueller or a brief post on the current transits to his natal planets (natal horoscope shown sans birth time).

Above image: Owl of Minerva, a botanical drawing set in a mystical glen by yours truly.