January 25, 2018: during the wee hours of this morning Stars Over Washington reached and topped 2 million page views. Of course, it only took 12 years to do so but I'm chuffed and sending out Warm Thanks to every reader who ever wandered in for a spell but especially to regular readers, followers, and FB friends!

And although it's an oldie but moldy, here's a link to SO'W's All Time Most Viewed Post for you:

Horoscope: March 20, 2015 Solar Eclipse in Pisces--Sneaks, Leaks, and Veils concerning the Spring Equinox 2015 Eclipse @29Pis27 in the 17 South Saros Series which conjoined the Aries Point and activated the difficult star of misfortune, Scheat. This was, of course, the Prenatal Eclipse of Mr. Trump's 2015 presidential bid announcement timed that morning with a New Moon @25Gemini...

'25Gemini' = "A Man Trimming Palms" which sounds like the rented audience members Trump paid $50 a head to so that someone would show up for his announcement at Trump Tower (you remember the escalator gliding slowly down with Donald and Melania--down from his gilded penthouse).

Rounded up we have '30 Pisces' for which I attempted a pencil illustration a few years back inspired by its Sabian Symbol. Here's the drawing, Temple of the Great Stone Face and, below, an excerpt from the post: 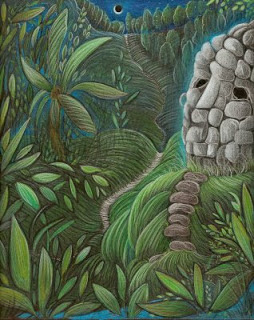 Here I quote from Marc Edmund Jones' version of the Symbols for '30 Pisces' which ends the full cycle/circle of the zodiac and butts against the Aries Point of Prominence (00Aries00):

'The Great Stone Face'...a symbol of human responsibility as an immortality of the soul, and of a way of living which has become a continual manifestation of its ideal and so a constant dramatization of its self-discovery to others as an encouragement to them in their own alignment to eternal reality.

Each individual selects the image within himself to which he would shape himself outwardly, and this he comes to resemble as in Nathaniel Hawthorne's tale. Destiny is character as it most persistently constitutes itself.

positive expression: self-integrity in its irresistible impact on the course of events;

The Sabian Symbols in Astrology by Dr. Marc Edmund Jones.

In addition, here's a curious detail from my notes concerning the Spring EQ 2015 Eclipse 17 South is the Prenatal Solar Eclipse of some weighty characters and entities: Iran, the German Empire, Rachel Carson, Newt Gingrich, Princess Diana, Ayn Rand, and Adolf Hitler. And the 2015 prez bid announcement of Donald J. Trump which links to Scheat via activation by the Spring EQ 2015 Solar Eclipse.