In a December 10, 2017 post I published a dual image of the Spring Equinox 2017 and Spring Equinox 2018 horoscopes for the sake of comparison and I labeled planet Neptune the "star of the show" for its angular prominence in both charts. As you know, the 164-year-old Republican Party is in process of a Neptune Return and this can be related to their current nebulous control of the three branches of government, plus, a conservative majority on the Supreme Court of the United States. Neptunian back room meetings are prominent on Capitol Hill as always but perhaps more so these days, thanks to Mr. Trump and the GOP.

And we should note that Neptune in its own sign of murky Pisces indicates potentials for pathological leanings and inclinations, mysticism, cravings, and pessimism (Ebertin); to this I would add such things as paranoia, fear, propaganda, instability, secretiveness, contagion, and shady activities. You may disagree, but there it is.

Below is a stand-alone horoscope of Spring Equinox 2018 (aka, the Aries Ingress) set for Washington DC. You see the 10th house Neptune @14Pis32 conjunct Midheaven (the Goal-Public Status-World Stage angle) and most visible spot in any horoscope. Neptune here suggests people on a spiritual mission--or public disgrace and since we're talking Politics (and considering all that's going on in DC), I must expect the latter, plus, some form or forms of dissolution as more congressmen step down or vow not to run again). Hidden motivations are also suggested by Neptune-MC, and written above the MC is "GOP natal Neptune 14Pis01" so they are the party most heavily affected as the GOP's Neptune Return trundles on through 2018 with disappointment, disillusion, delusion, dishonesty, instability, and perhaps inspiration in tow. As for a spiritual mission, the furthering of America's Secret (Neptune) Destiny may be referenced here. In the chart, the 2nd house North Node of future destiny is in Leo, sign of leadership, so America's next Nodal Return occurs this summer.

And if We The People play our cards right, perhaps karmic progress can be made especially since the Equinox's Prenatal Eclipse (PE) @27AQ07 on February 15, 2018 (here in 9th house) conjoined (or eclipsed) the US natal Moon of July 4, 1776 in the 1 South Saros Series with its themes of: flooded with ideas and options (Brady). Actually, Solar Eclipses in Aquarius, sign of humanitarianism, suggest just that--karmic progress is made when the past is used as a guide to future development rather than being seen as a burden (Rose Lineman). Open-mindedness is a must so obviously, Trump-style bigotry, misogyny, and zealotry must be overcome--and now is our opportunity to do so once and for all--if a majority of us take it advantage of it. 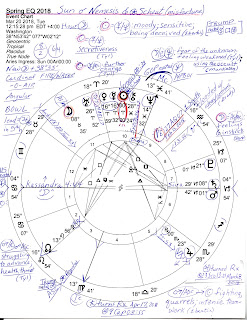 Now as you see, rising is 4Can54 which brings up asteroid Kassandra (the prophetess who tells the truth no one believes), plus, US natal Venus, Jupiter, and Sun (POTUS) and hints that US currency evaluation issues are rising (as they are) along with budgets and funding (as usual). The chart-ruler Moon @8Tau035 is in the 11th house of Groups and Organizations with Taurus a money sign further indicating financial concerns of the public (Moon) and suggesting the lunar tendency toward publicity. However, as chart-ruler, the Moon makes no major applying aspects to other planets though there are waning trines to both Mars and Saturn snugged 'round the Descendant angle of Partnerships. (See the above link for additional Solar-Lunar info.) Plus, austere, conservative Saturn conjoins fixed star Facies (key phrase: ruthlessness or the victim).

All this bodes ill for partnerships and alliances with Washington (Trump), and also points toward the ill will between Mr. Trump and his many opponents. Note that Trump's first natal planet/s to rise in this chart are his 11th house Venus and Saturn in Cancer (partnership break-up/s?); his natal Ascendant is in 3rd house so no doubt we'll hear and read much about and from the put-upon Mr. Trump. Meanwhile, we must attempt to keep up as best we can with what the government is doing behind our backs while the distracting turmoil is going on for the Trump Distraction is very useful for saboteurs, foreign agents, and the current crop of coup-mongers in our government. Yet the Moon is apex of a midpoint picture with ASC-MC denoting feelings and intuition in the lead, plus, attitudes toward the feminine sex in general. This picture is emphasized along with the Moon's sign and house position. Plus, there's Luna's ruler-ship of both the 1st house (Spring season) and 2nd house (National Treasury; Values, Earning Ability; Issues of Self-Worth).

In addition, Sun reaches Aries Point during a Moon Hour so fluctuations and changes are in store within various realms, financial included (US natal Pluto is in the corporate 8th house of Credit, Debt, Insurance, Death, and Transformation). Note also that unmarked on the chart is the Moon conjoining two fixed stars: Hamal, the alpha star of Aries (to follow one's own path) and Schedir, the Queen. News of change for Elizabeth II? Perhaps. She will turn 92 years young on April 21st this year and the transiting North Node will very soon point toward her natal Leo Moon.

Now on the evening of March 20th, Luna does go on to sextile Neptune at 10:42 pm EST which denotes a need to guard against delusion, deception, fraud, and falsehood. But since we're talking Politics here, I know you're continually aware of such a need! For after all, astrological Neptune is planet of the masses, and also of the media whose mission of spouting propaganda at We The People on behalf of the power elite seems never-ending. This may be part of the Neptune-at-MC picture, I suspect, along with the dissolution of various government agencies now ongoing.

And although I neglected to enter it on the chart, 'dog star' Sirius @14Cancer (The Scorcher) rises in 1st house and can represent many concepts: the goddess, goddess worship, renown, dog bites, and, according to Nicholas Devore, denotes great dignity when rising. But whose dignity I cannot say! Can you? Special Counsel Robert Mueller's dignity perhaps?

Also in the public 10th house are wounded-wounding Chiron @28Pis24, Sun @00Ari00:00 conjunct transiting asteroid of divine retribution, Nemesis (POTUS vs The Establishment, the 'unbeatable foe'?), and Mercury @16Ari32 conjunct Venus @16Ari59, the Kabbalistic Shekinah pair with its 'divine presence' and 'sacred feminine' vibes. So considering the currently touted 'rise of the feminine' in America, perhaps Sabian Symbols for '16Aries' (the 'karmic confrontation' degree) and '17Aries' will be revealing:

"16Aries": "Brownies Dancing in the Setting Sun" = INVIGORATION: positive: simple good fortune together with unlimited opportunity as the direct fruitage of effort; negative (unconscious/shadow side): delusions of adequacy with a complete inability to act in real self-interest.

"17Aries": "Two Prim Spinsters" = DIVORCEMENT: positive: utter fidelity to self and all its special idealizations of its own capacities; negative: an increasing exaltation of shallow interests and a witless pretense of distinction and great virtue." (The Sabian Symbols in Astrology, Marc Edmund Jones).

Well, that's all I have to say for today about Spring Equinox 2018 in Washington DC. You may certainly find more chart factors worth noting in your own opinion and I hope you will!

Related Posts include: GOP's March 6, 2018 Neptune Return (#3 of 5) chart if you're curious; other Return dates are listed in the post. Also see Solar Eclipse of the 2018 Midterms, aka, 'The (structure-collapsing) Tower Eclipse'.

Now here are some 'Kassandra Blessings" for us all: 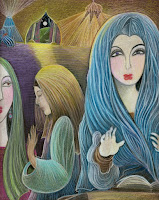