April 10, 2018: as you've undoubtedly heard by now, the NY FBI raided the Manhatttan office, home, and hotel room of Trump's personal lawyer Michael Cohen yesterday "just after 5:00 am" according to the New York Daily News. Confiscated are said to be emails (including communications between Cohen and Trump who 'doesn't email'), business records, documents, an iPad, a briefcase, and who-knows-what-else.

Below is a messily penned version of a horoscope set for Manhattan, NY April 9, 2018 at 5:07 am edt with deceptive Neptune in shady Pisces rising along with fixed star Achernar (crisis at the end of the river; risk of rapid endings). Note that Donald Trump's natal Sun-NN-Uranus is at IC (the Basis of the Matter) which publicly projects his Moon-SN conjunction at Midheaven (relationships and contacts), and of course MC is the WHY? or Goal Point of any chart. Transit Jupiter Rx in corporate Scorpio, sign of secrets, leads a BOWL shape of planets suggesting a 'scooping up' sort of situation while potentials of the Jupiter-Pluto midpoint at MC are penned on the right side of the chart. Note that transit Jupiter has been playing around Mr. Cohen's natal Neptune (19Scorpio) of late and investigating pretenses and deceptions--and will conjoin it precisely after moving Direct on July 10, 2018. The recent conjunction of harsh Mars and Saturn occurred near or perhaps conjunct Mr. Cohen's natal Moon in Capricorn though without a birth time for him his natal Moon could be in late Sagittarius (born August 25, 1966 Long Island, NY; noon Moon @2Cap17, latest Moon position could be 8Cap31--opposite Tramp natal Mercury @8Can51). The April 9 FBI raid's Chiron @29Pis33 conjoins Cohen's natal Saturn @28Pisces--and note that Scheat @29Pisces, a star with potentials for malevolence, extreme misfortune, murder, suicide, and/or imprisonment (A. Louis), conjoins Chiron-to-natal-Saturn near the Aries Point of Fame, Fortune, and Recognition.

Plus, the Venus-Pluto midpoint also rises with fraudster Neptune hinting that concealed financial assets, deception, immorality, and seduction are involved (ex: $130,000 Cohen paid to Stormy Daniels for her silence--and the NDA now asserted to be null and void because Trump--as 'David Dennison'-- failed to sign it...on purpose is my suspicion, perhaps for the sake of 'plausible deniability'). You'll undoubtedly find more worthy chart factors if you have a chance to take a look!

So please enlarge the image for easier reading if you wish to check out my notes concerning this ongoing situation: 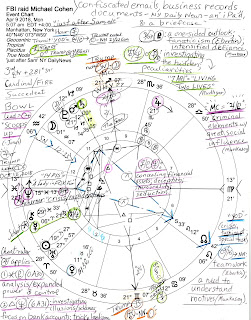 This horoscope is messy because it's what I do. But also because this is a very messy situation full of complex conditions, hidden events and furtive motives which are due to be uncovered, perhaps around the time of the upcoming Solar and Lunar Eclipses (which include a repetition of Trump's own Prenatal Solar Eclipse on July 13, 2018 @21Cancer) so that and other disruptive cosmic conditions for Mr. Trump during the rest of 2018 and very much through 2019 do not look very promising at all for the embattled kingpin-in-chief in the realms of politics, finances, and relationships.

Related Posts include: The Natal Mercury of Donald Trump and 2018 Saturn to Trump natal Mercury-Neptune Square which describes law-abiding Saturn in process of stressing out Trump's Mercury-Neptune square of deception, fantasy, falsehoods, disguises, sneaky schemes, indiscretions, and misconceptions. Plus, entering Trump's name in the SO'W sidebar Search box will yield a plethora of related and other posts.