The Natal Chart of Stormy Daniels with Sappho Rising

April 11, 2018: once the New York FBI raided the home, office, and NY hotel room of Trump attorney/fixer, Michael Cohen on Monday (April 9, 2018), it seemed the time to post the natal horoscope of Trump 'amor' "Stormy Daniels" (nee Stephanie Clifford) so here's her horoscope with my typical messy notes, plus a few Trump natal planets and angles marked in red around her chart; as you see, sexy Sappho rises: 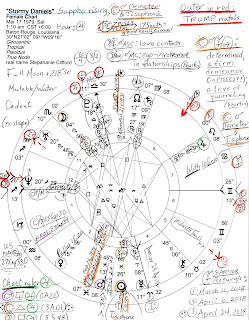 Added to the chart are two lunations--her Prenatal Solar Eclipse @7Pis29 in the 17 South Saros Series with themes of good news and success in relationship matters (Brady) and her Syzygy Moon @22Vir41 conjunct fixed star Denebola (out of the mainstream; to go against society) in 9th house and this is supported by natal Moon @4Sco56 as apex planet of her Neptune-NN midpoint (lack of community spirit; disappointment in relationships--Ebertin). Another picture, Uranus-Pluto = Moon gives her a sense of restlessness, plus, determined ambition, intuition, and emotional conviction (Tyl).

One implication of see the current Cohen-Trump turmoil over sex and hush money is seen via Trump's natal Jupiter conjunct Miss Clifford's natal 10th house Pluto (18Lis26 Rx), plus, natal Sun @26Pis05 conjoins asteroid Demeter (Greek goddess of nurturing which in Roman Mythology is Ceres) and asteroid of retaliation, Tisiphone. Note that in a Jupiter-Pluto hook-up, astrological Pluto, as always, holds the cards.

Three aspects to her chart-ruler Jupiter (at critical degree in 8th house of sex) are listed, lower left and she is in process of a three-fer Mercury Return with dates listed, lower right--Mercury's next exact hit occurs April 24, 2018, and as you know, Mercury rules negotiations, deals, and agreements including Non-Disclosure Agreements (NDA).

The lady's last/current Jupiter Return (29Can07) perfected on July 12, 2014 with natal 8th house rising and transit Neptune @7Pis19 conjunct her PE, a Total eclipse which manifested on February 26, 1979. The last 17 South Eclipse occurred March 20, 2015 conjunct Scheat, a difficult star of extreme misfortune. This 17 South solar manifestation was the Spring Equinox 2015 Solar Eclipse of 'sneaks, leaks, and veils' which heralded the prez-bid announcement of Donald Trump (with Stormy's hush money paid just before the 2016 Election). Also note that Stormy's essence is seen via the closest applying aspect to natal Sun and in her case, it's a Sun-Jupiter trine (3A01), an aspect of good luck and success which makes it easy for her to gain the cooperation of others.

And if we progress Miss Daniels' natal chart, we find that she symbolically entered a Balsamic Lunar Phase of endings, partings, and/or hidden activities on January 24, 2016 with SP Moon @17Pis24 conjunct SP South Node, a separative influence. Approaching for her is a new stage in life, an SP New Moon @5Tau42 which perfects on June 17, 2019. Mr. Trump, a Moon-SN kind of guy, was elected during a Balsamic phase and he remains in it until an SP New Moon @3Virgo perfects on September 16, 2019.

For now that's all I wish to type concerning Stormy Daniels' natal horoscope so please enlarge the image if you wish to read my scribbles. And also note that the lady's natal chart and a few biographical details are available at astro.com (RR: A) so get thee hence, if you so wish.

Stephanie Clifford natal data: March 17, 1979 1:10 am CST Baton Rouge, Louisiana, with the hour of birth tweeted by the lady herself.